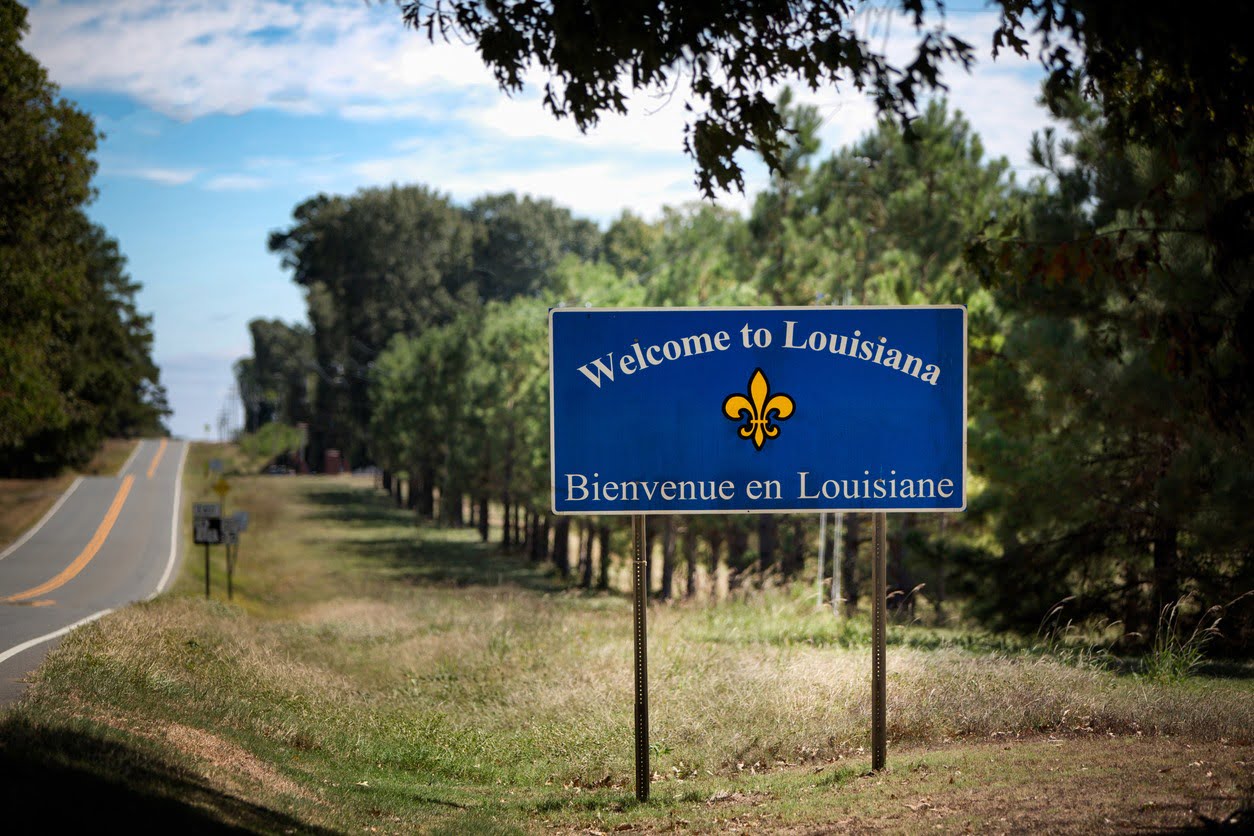 In our North American travels, Linda and I have passed through Louisiana several times but have never stopped. Yet Louisiana’s history and culture are unique and inviting. As part of our February, 29 day RV road trip, we chose to make a four-night stop using Poche’s RV Park, in Breaux Bridge, in the heart of crawfish country, just north of Interstate 10, nine miles east of Lafayette.

We set out to gain a better understanding of Louisiana’s language and culture.

It was time to explore this uniqueness.

In the year 1713, French-speaking people had lived in Nova Scotia, Canada, and the Louisiana Territory for over one-hundred-years. These French people had been forcefully transplanted from France to help colonize the new world. In 1713 the Acadians of Nova Scotia were again forcibly moved by the British to the Louisiana Territory. For these colonialists, their language was the French of the streets. They became known as Acadians.

The Heart of Crawfish Country

Breaux Bridge on the banks of Bayou Teche offers the opportunity to learn the history of Louisiana, savour the food, and enjoy the culture. A culture that I mistakenly thought of as Cajun.

Louisiana is the US state where the language of Native American, Acadian, Spanish, French, and English are embroidered into one culture. This cultural blend adds colour and vitality to the daily conversations. This mixture of backgrounds, words, music, and skills affects how these people think of themselves and each other.

Poche’s RV Park and Fish-N-Camp is a modern, well-maintained RV campground. There are five, ten-acre lakes, separated by levees. The levees now have either a paved road or a dirt track on the top of them. Off the paved roads, on the dams, are 85 RV sites. Each site has a level concrete pad and a full hook-up. 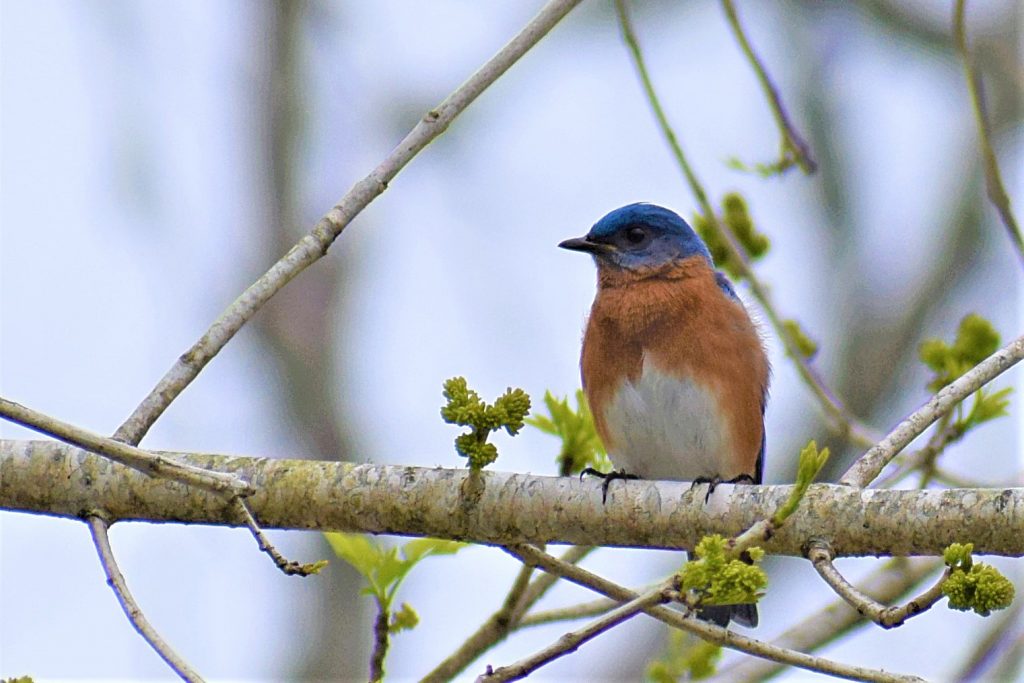 The park has clubhouse activities and a pool. You can fish all around the lakes, spend time bird-watching or rest in the sun. I enjoyed watching this Eastern Bluebird, as it hunted for insects around our campsite, as a couple fished off the fish cleaning station with our RV in the background.

Talking with Howard, who has been part of the RV Park maintenance team for many years, he told me, “These lakes were originally commercial crawfish breeding ponds. Twenty-two years ago, the original owner added six RV pads near the office. Over time they stopped the crawfish breeding, increased the number of RV sites, and stocked the ponds for fishing, with Bass, Bream, Sacalait (Crappie), and Catfish.”

Angela, who worked in the RV site office, explained the fishing rules, adding, “You can eat what you catch and are expected to release what you don’t want to eat. Last week a man caught a big seven-pound Bass; it was weighed, photographed, and released.”

In Louisiana, you hear many words that are not English. We went in search of somebody who could explain what the words mean.

With music, the words “Acadian” and “Cajun”, I could almost understand. The music had a Canadian east coast familiarity to it, but suddenly we were introduced to a new, seemingly unrelated music word, “Zydeco.”

Our search led to more words that required further explanation. What can you expect to see on your plate when you order Oka, Doudin, Crackling, Gumbo, Roux, and Jambalaya?

We went to talk to Angela about the language. Angela introduced me to Greg Domingo, the new RV Park owner.

I asked Greg why he had purchased the park and what his plans were.

His answer was simple: “I have been camping for recreation in this park for fifteen-years. As I retired three months ago, the park came up for sale, and I jumped at the chance of ownership. I have already improved some roads, and I plan an increase in the number of campsites. The website is in the process of being revised.”

While I talked with Greg, Angela was making a phone call. She asked me, “do you drink beer?”

Placing her cell phone back on the counter, Angela said, “I recommend that you eat out tonight, drink a beer or two and dance the evening away at the bar called Point Breaux’s, it’s just four miles away.  I have just checked they have a live band playing. If you go there, you will get a taste of Cajun and Creole food, our Louisiana hospitality, while enjoying the music and dance styles of our culture. Tomorrow I suggest you go to Vermilionville, a historical re-enactment village. You will be able to ask better questions after your experience at Point Breaux’s.”

Point Breaux’s is a Cajun restaurant; it serves typical Cajun and Creole dishes in an atmosphere taken from an earlier time. Log beams form the walls and central pillars, with polished wooded planks as the ceiling and floor.  The tables are simple, with red and white gingham covering. Metal folding chairs with black padded seats and backrest, add the final rustic look, with the smell of spice in the air.

Dressed for dinner in boots, jeans, and casual shirts, we fit in well with the local clientele.

I had crawfish “Gumbo” soup, followed by “Jambalaya,” served on a bed of rice cooked in what they called the “Cajun Trinity.” The desert was Bread Pudding and thin custard. After coffee, we danced to the live group who played foot-stomping Louisiana music.

In following the recommendations of Angela and Greg, we had eaten exotic spicy food, and enjoyed a fun evening dancing to music with its contrasting rhythms, played on accordions, washboards, violins, and guitars. We had increased our experience but not our knowledge.

The next day we headed for the Vermilionville, an 18/19 century re-enactment historic village built along the Bayou Vermilion. It was here that Angela and Greg had assured us that we would get answers to all our questions about Louisiana culture, it’s people, and its uniqueness.

At the reception desk, Melina, with her French accent, pale skin and blonde hair, asked politely, “do you qualify for the senior rate?”

“Yes,” we laughed, and then we started asking questions.

“I think I understand the basic difference between Cajun and Creole,” I said, but where does the word Zydeco as applied to music come from?”

Melina pushed her blond hair back, “that is easy,” she said, smiling, and with her French accent. “Cajun people are people with a direct line of descent from the Acadian refugees or the early French immigrants. The Creole people are of a mixed-race and French. Creole comes from the Spanish and Portuguese words criole, which means someone born in the Americas during the colonial period. It implies that they are of local indigenous heritage. They were the farmer managers and the farm workers. These farm workers celebrated when the harvest was finished. Zydeco music is the music of the harvest festivals after the crops were brought in.

Zydeco is the corruption by the Creole farmhands of the French word haricots, meaning green beans. The French word haricots pronounced in Spanish by the African farmers became Zydeco. Zydeco became the wild music of a party. The music was played on a washboard, guitar, and drums. This was the music that the African and mixed-blood residents of the bayous loved to dance to.

Green beans are part of the Louisiana food group known locally as the Cajun Trinity, onion, bell peppers, and green beans, which are used as a part of many dishes. Green beans (haricots) are the last of these vegetables to be harvested. Then the party could begin.

This lesson was reinforced as we spoke with the people playing the role of an interpreter from the eighteenth century. We met an Acadian interpreter explaining the differences in the Acadian, Cajun, and Zydeco Music. Our knowledge of food, music, and the history of Louisiana grew as we talked to blacksmiths, schoolteachers, and housewives. Housewives who might spend twelve months making one shirt. A shirt that starts with spinning yarn, then weaving the yarn into cloth beforehand sewing the material. I asked an interpreter who was working as a blacksmith, about what was called typical Creole house roof lines. The words used for the visible double slope did not translate into English. His answer was simple. It means that it creates shade and airflow. 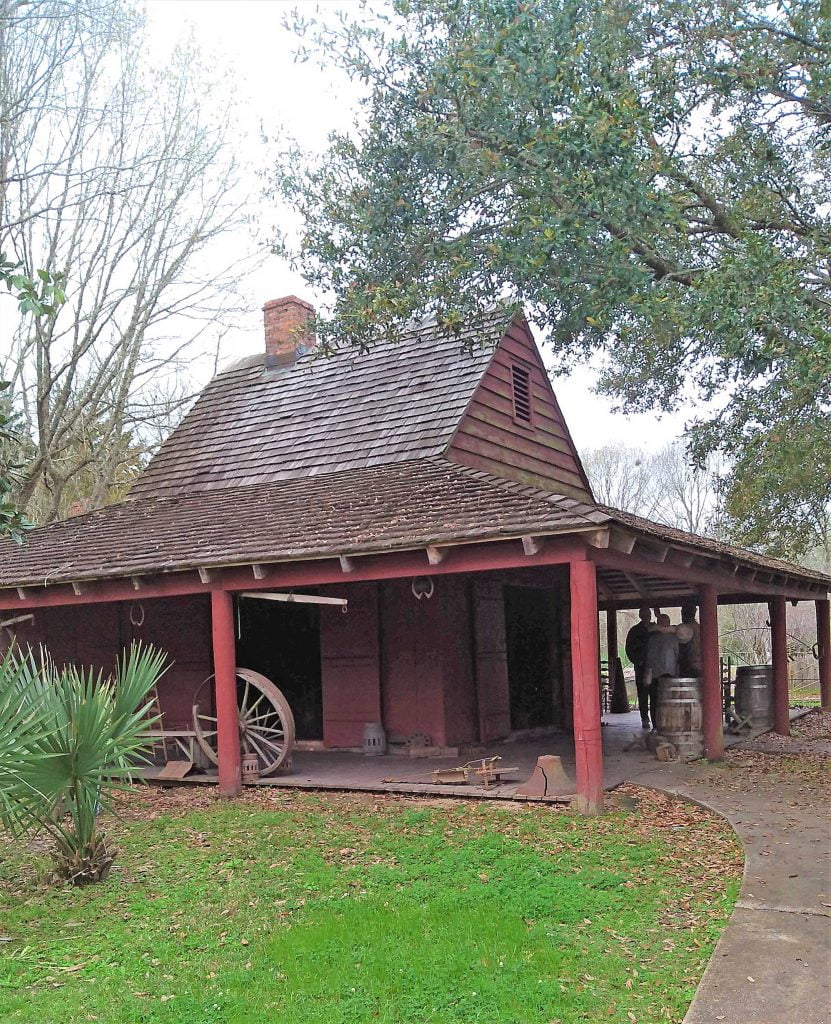 Agriculture and Water Management is achieved with its levees and pumps, this enables farming, in this flat, low-lying land. Dikes protect crops from water damage and are used to enclose flooded fields for rice and crawfish farming.

The bayous (rivers or streams) weave through Louisiana, running north to south. The direction of these bayous makes east-west transport difficult. Two-hundred years ago, they solved the problem with a floating platform pulled across a stretch of water by a man hauling on a rope. I had the opportunity to operate a Guide Rope Ferry across a bayou, it’s not as easy as it looks. Today the highways are built on stilts as they cross swampland. 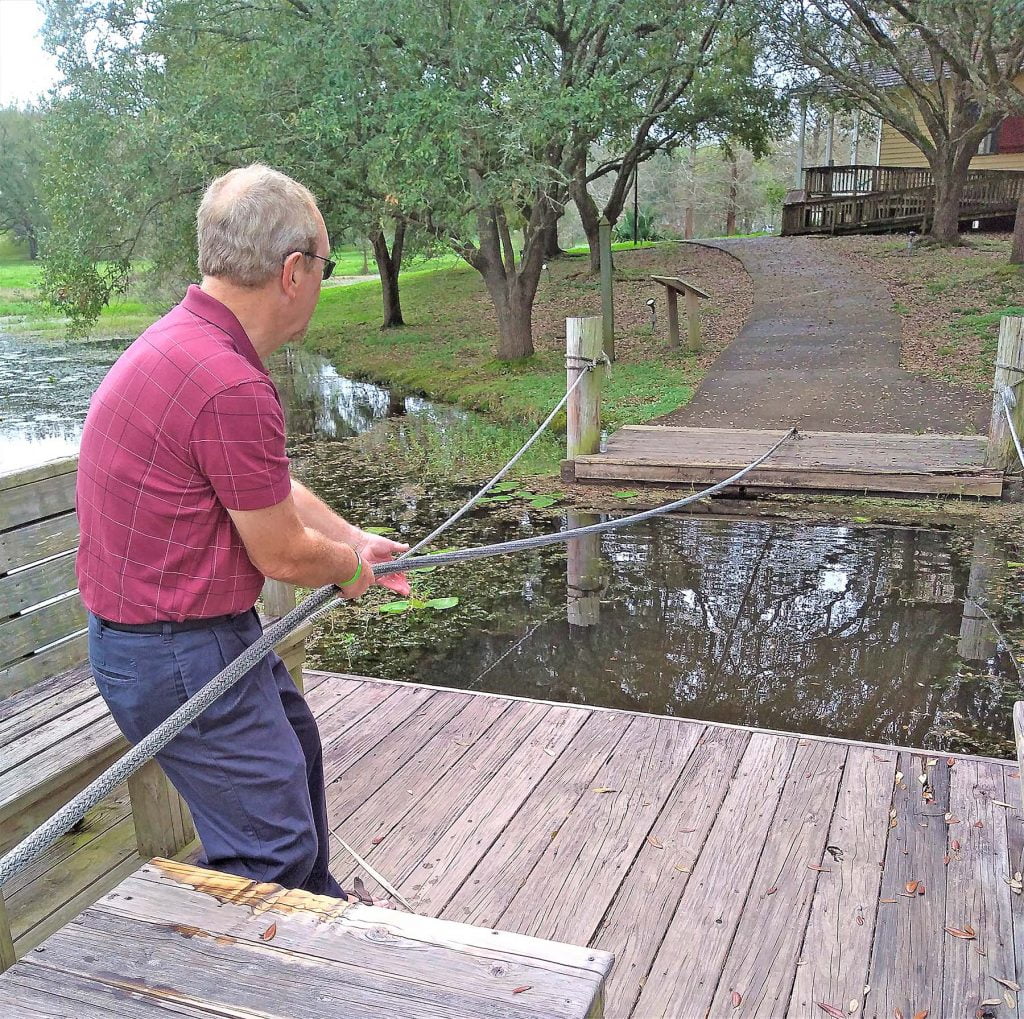 The uniqueness of Louisiana can be summed up as the language of the people. As immigrants, we all brought our cultural backgrounds to the Americas.’ In this relaxed, fun-loving state, it is the words, and how they percolate through every aspect of life that makes this a unique experience. 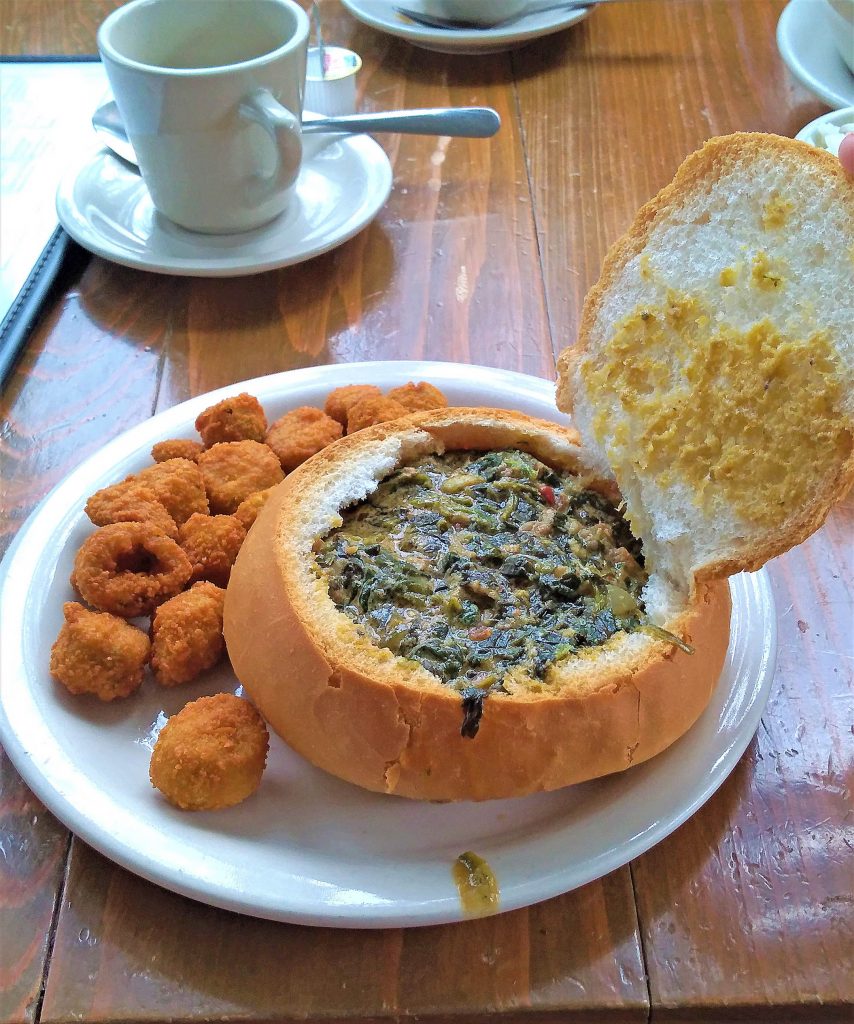 At a roadside restaurant the next day, we had Crawfish Bread Bowl with battered and fried Okra (a green pod vegetable of African origin). The whole Louisiana experience was enjoyable and will come back in the future. 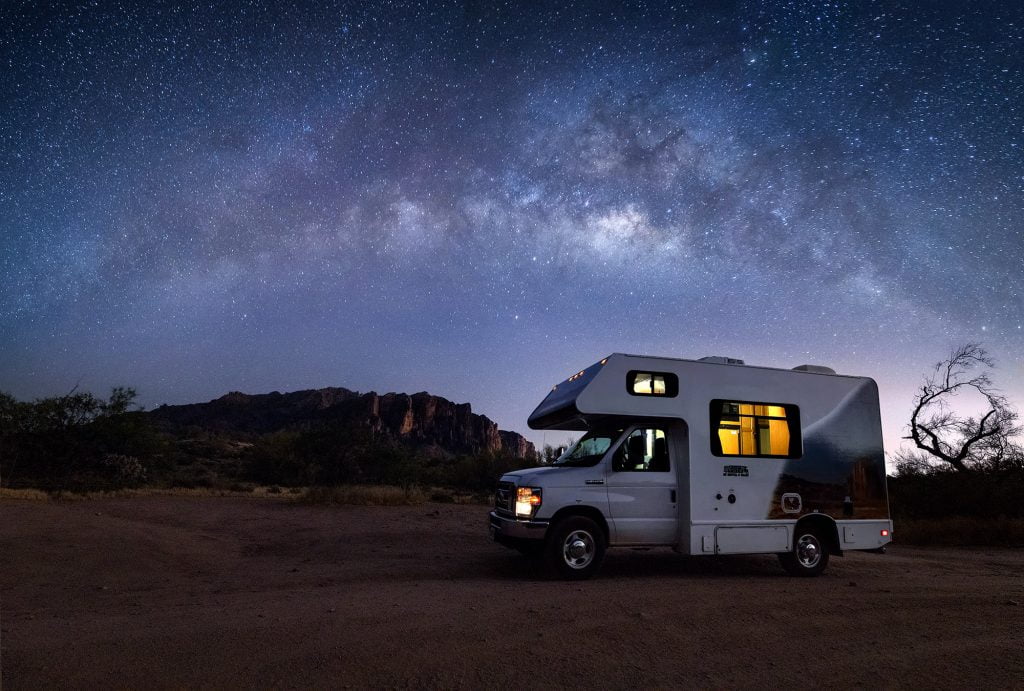 The high desert of the American Southwest (which includes the Four Corners) is a very popular winter destination for Canadian RVing snowbirds. But for the 2020/21 fall and winter, with the boarders closed and the pandemic situation still unfolding, many travellers... 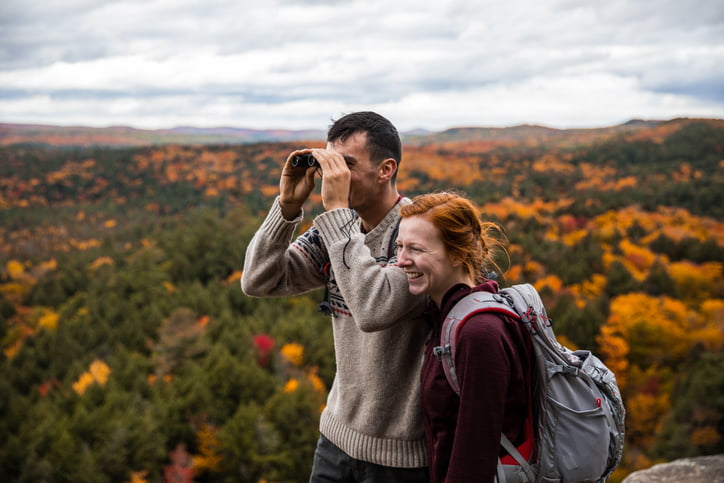 While we may think that Summer is everyone's favourite season after a long cold winter, it doesn't seem to be the case. A quick Google search of polls will show you that Fall ranks highest every time. Living in Canada and especially Ontario, it's easy to see why.... 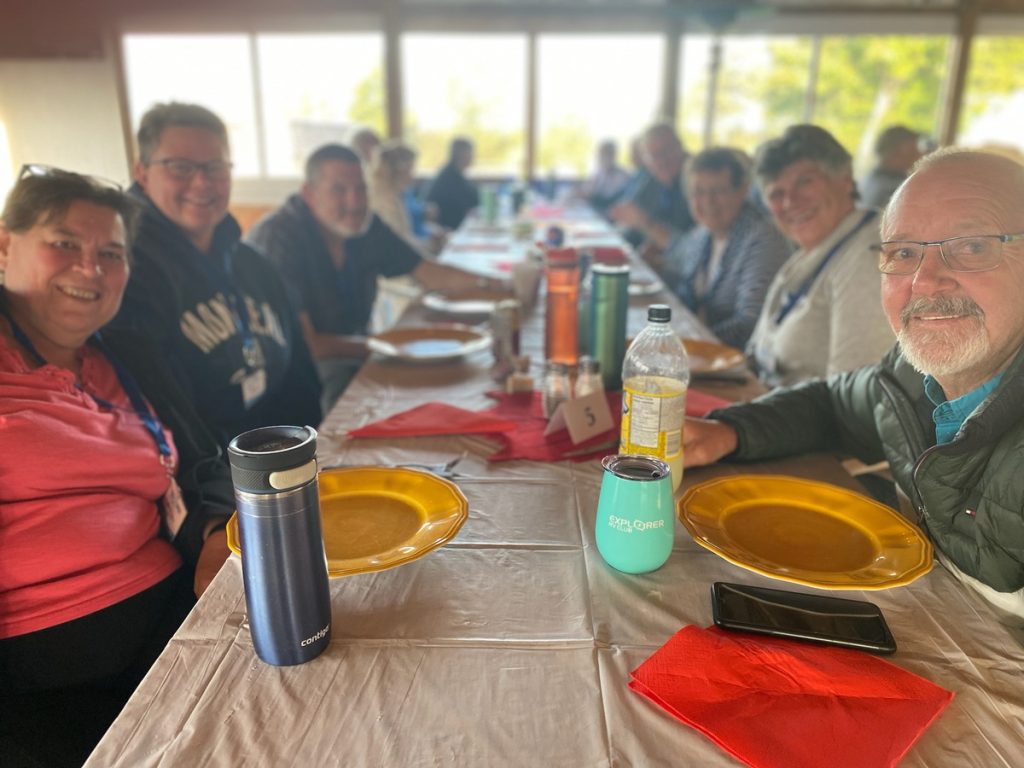 The 2022 Explorer RV Club National Rally was held at Camping Transit Campground in Lévis, Quebec, from September 15 to 18. A few members came in the day before to get an early start. The weather started wet, but the forecast didn’t disappoint, and the sun came out...