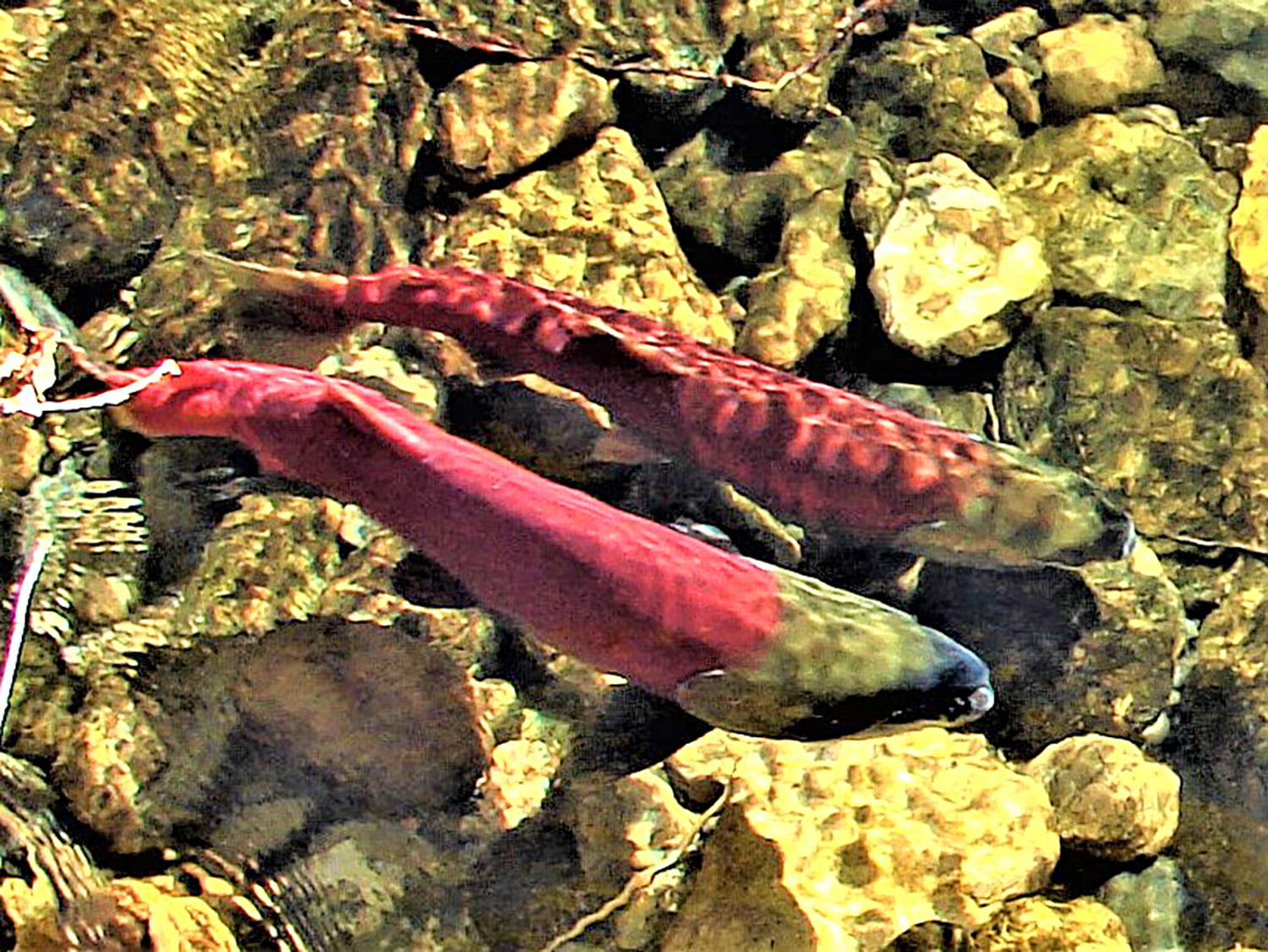 It was October as we drove north in our fifth wheel trailer. North from Vancouver to the Tsutswecw (Roderick Haig-Brown) Provincial Park, British Columbia, to experience the Adams River, Sockeye Salmon run. We had come to witness some 34-million Sockeye salmon arrive and converge at the Adams River Spawning Ground.

It takes the salmon twenty-one days to cover the last 500 km from Vancouver to the Adams River spawning pools. This is the last leg of an odyssey that took these fish from these rivers four years earlier, out into the North Pacific. Now they were on the final run home – home being the Adams River spawning ground, where these salmon will mate, lay their eggs, and die in that order.

People travel from around the world to witness this spectacle, widely seen as a mysterious ritual and a celebration of life and its cycles, that as Canadians, is on our doorstep to experience. Just another privilege of life in this country.

You too, can experience the Adams River Sockeye Salmon Run, but timing is critical. Ask any sockeye salmon; only they have the dates. So far, however, they’re not talking

It Started With an Unexpected Email

Linda and I had travelled from Kingston, Ontario across the northern states of the USA during the month of September. It was now the first day of October and we were heading West to Vancouver to visit our son and his family. The email arrived as we approached Seattle, a message from an RVing couple who lived in Kamloops, British Columbia. We had met Ross and Carmen when we previously took part in an RV Caravan a few years earlier, traveling down the Baja to Cabo San Lucas.

The email from Ross read: “I see from Facebook that you will be in Vancouver during October. Are you free the second weekend of October? Would you like to see the Adams River Salmon Run? Patrick and Karen are coming.”

We are RVers, if nothing else, we can deal with a change in plans. We said yes.

When in Vancouver, we typically stay at the Burnaby Caribou RV Park and Campground, which is a well-laid-out campground, with each site screened from the next with shrubbery. It has paved roads, good parking, an RV wash station, swimming pool, riverside walking trails, and is only a short walk to a Skytrain station which opens the whole of the greater Vancouver area for you.

But then during the second week in Vancouver, we left for a weekend to drive up into the mountains. A drive of almost 500 km for the reunion with the two couples from our Baja RV Caravan and our compatriots for the viewing of the 34-million Salmon who would soon be swimming upriver.

Therefore, it was on a typical grey Vancouver morning, with the sun fighting its way through the low cloud and gentle rain falling, that we pulled our rig out of the Burnaby Caribou RV Park and started the drive towards a weekend with a few friends and 34-million fish.

In the fall, Log Booms and salmon arrive at the mouth of the Fraser River, all part of BC’s natural harvest, always bountiful in nature.

After four to five years out in the northern Pacific Ocean, the salmon gather here at the mouth of the Fraser River to start their journey inland to the spawning ground.

As they gather, the salmon don’t eat, and their scales are removed by rubbing against rocks. The loss of fish scales is what changes their appearance from silver to the distinctive scarlet-red bodies and green head of the spawning sockeye salmon. 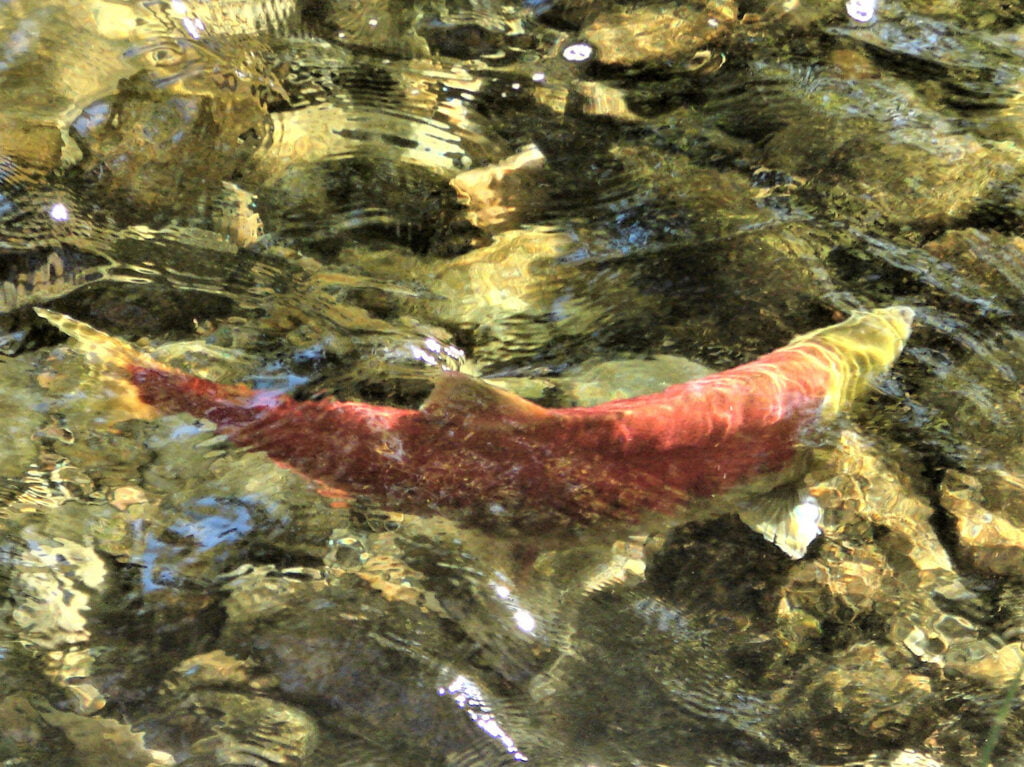 The nets off the coast have taken their share and perhaps more, but still, every fourth year, known as a ‘dominant year’, as many as 34-million salmon will enter the Fraser River system.

This is the last leg of their mysterious journey, and it is known as the salmon run.

For British Columbia Sockeye Salmon, it’s a fight for their life or at least, the life of their offspring for whom their own lives are given. The sockeye salmon take about three weeks to swim against the river flow from the Pacific to the Adams River Spawning ground.

The salmon flesh at this stage is not good to eat, nor are you allowed to catch the fish at this stage in their race to the breeding grounds. The eagles, osprey, and the bears did not get this memo however, and show no reluctance in catching the salmon in the shallow rivers.

A Note on Safety: The salmon themselves are harmless, however it is essential to exercise care if tempted to approach the fish for a photograph without first taking stock of your surroundings and determining if you have any company in your salmon-watching. The last place you want to be, apart from the teeming waters, is in the talons of a large bird or the claws of a bear as you come between them and their intended meal.

The drive from Burnaby follows the Coquihalla Highway (Highway 5) northeast for about 500 km.

It’s always wise to check the weather before driving the ‘Coquihalla’ as snow and ice are not uncommon from early fall to late spring on this road as it winds through the Cascade and Coastal Mountain ranges.

As you leave the lower Fraser River valley and climb into the cloud cover, you pass the towns of Abbotsford and Chilliwack. Typically, the morning fog thins out as the road climbs, and these giant mountains come into view. 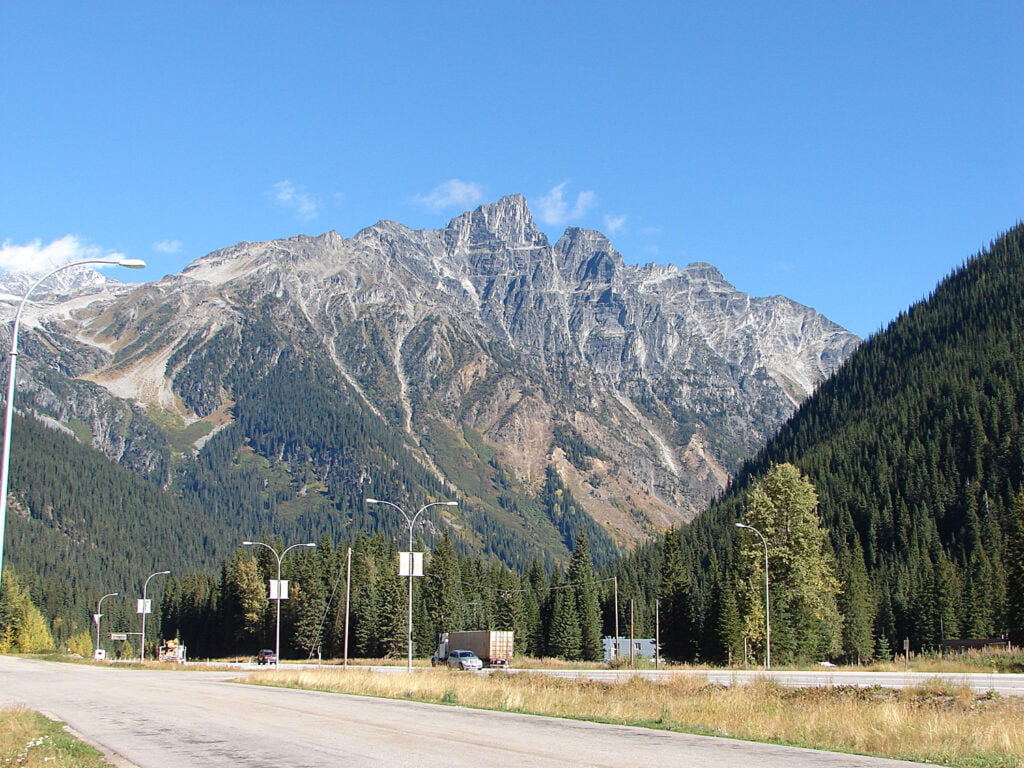 Out in the open above the cloud, the expanse of mountains and the valleys are clearly visible. You can see the tree-line as it climbs up the almost sheer rock faces, and streams cascade over rocks to the fertile valley floor.

The Coquihalla Highway follows the sides of these mountains and valleys. At the higher elevations on the valley sides, small concrete barrier walls keep any wavering motorists from disaster, however the barrier walls look almost insignificant when viewed from the cab of a big truck or rig like ours.

Our RV campsite was at Chase Lions Club Campground. The Lions Club RV park at Shuswap Lake is small with only a dozen sites, but it’s convenient for Tsutswecw (Roderick Haig-Brown) Provincial Park visitors and the observation trail along Adams River offers a view of the last stretch of Sockeye Salmon Run. 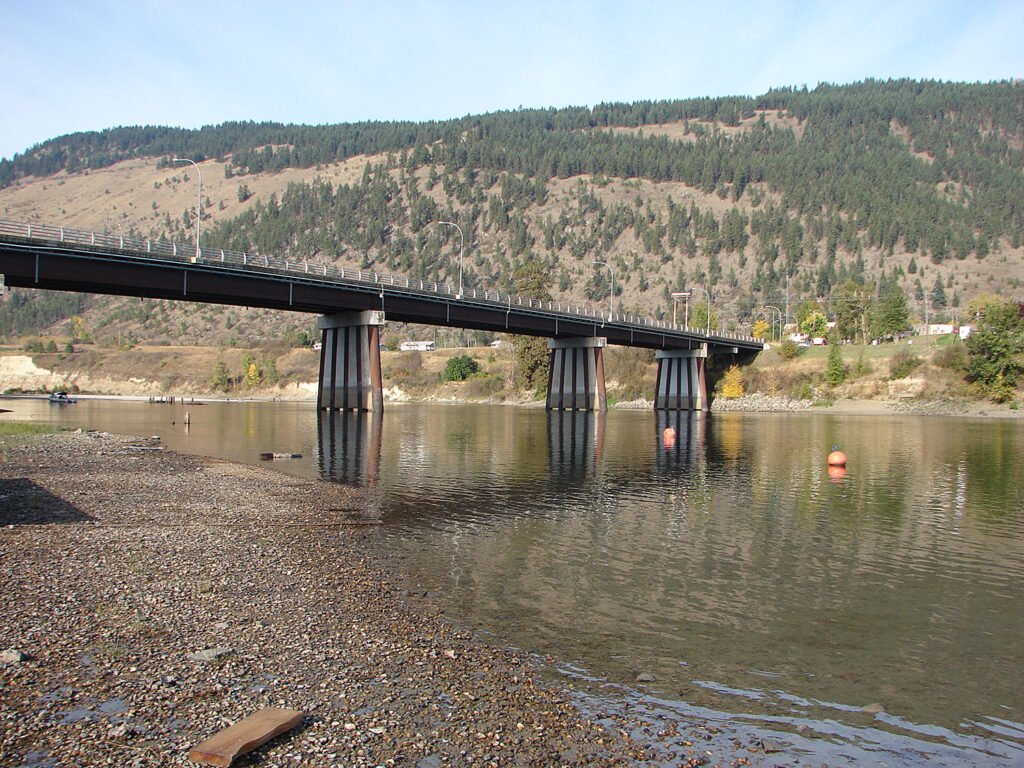 That evening we got our first view of the salmon cruising under the bridge just off the campground beach. Fins break the surface, their blood-red bodies visible just below. Downriver, a lone dead, silver salmon carcass drifts slowly by.

After a walk on the beach, we feasted on fresh salmon brought in from the coast by our BC friends. Then around the campfire, we did what RVers do best and love most apart from the journeys themselves – we discussed our travels well into the night. 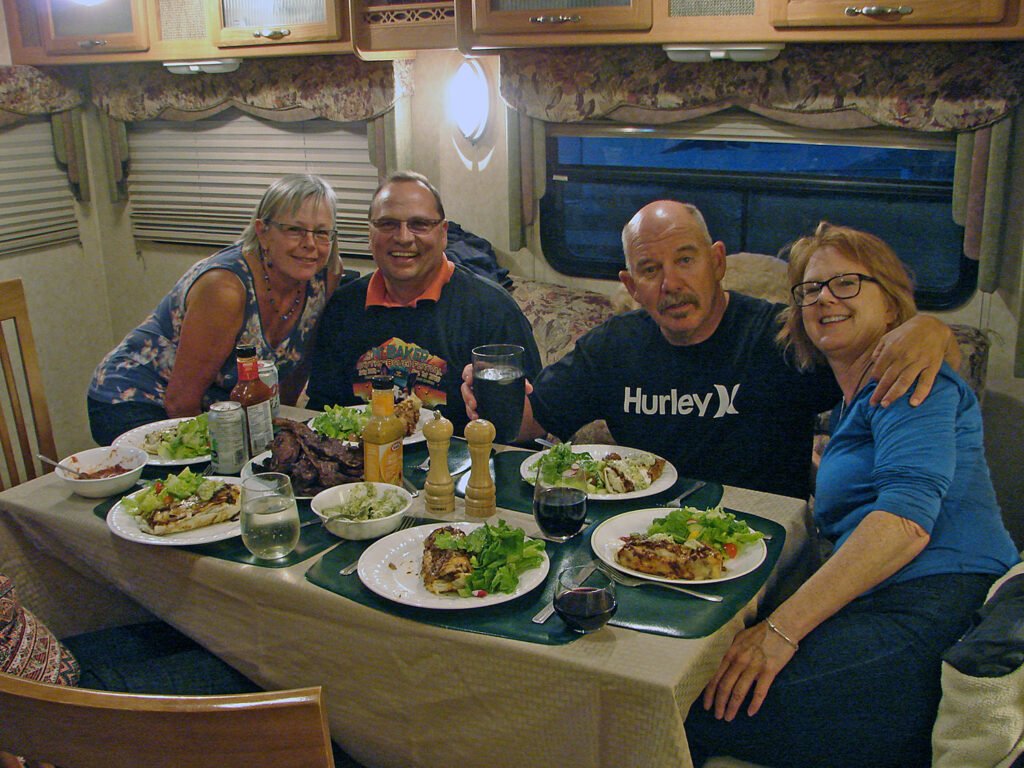 Lunch at Quaaout Lodge, BC

The salmon make a slow start to the day, allowing you to do so as well. While you wait for the salmon to start moving, an early brunch at this luxurious Quaaout hotel overlooking Shuswap Lake fills the time gap and your bellies. 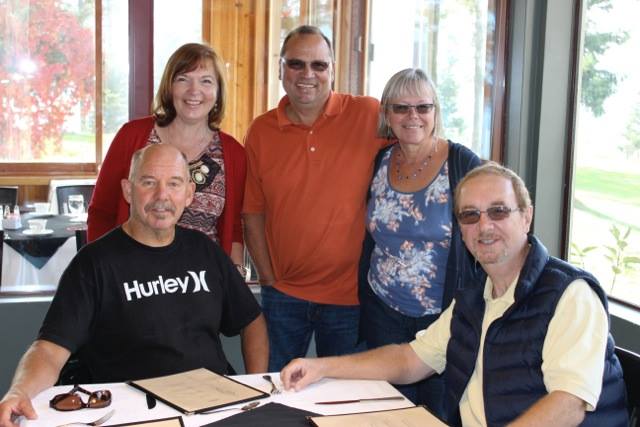 The trail from the Provincial Park car park places you on the east bank of the waiting pool. The waiting pool in the river looks empty, but if you take a moment to put on your polarized sunglasses and take another look once your eyes adjust to the glare of the sun on the water, you can see the salmon beneath the surface. 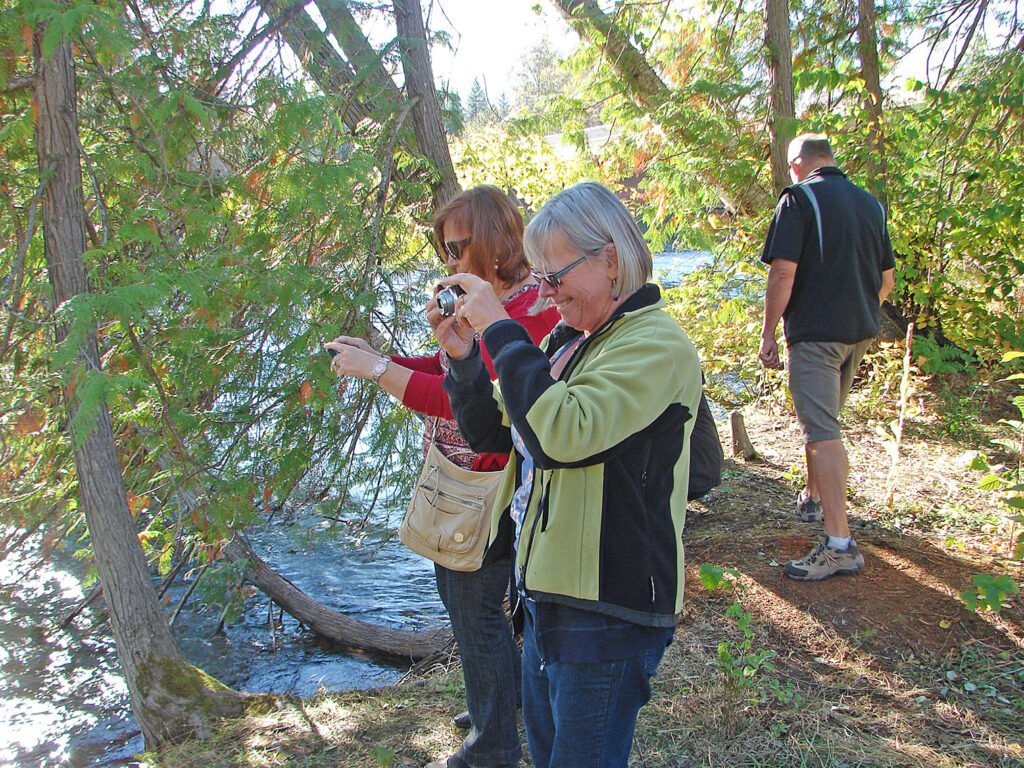 Waiting by the Waiting Pool

The fish are hardly moving as they rest in the shallow waiting pool. The shadows of the thousands of 15kg salmon fill the entire width of the 100m wide river. 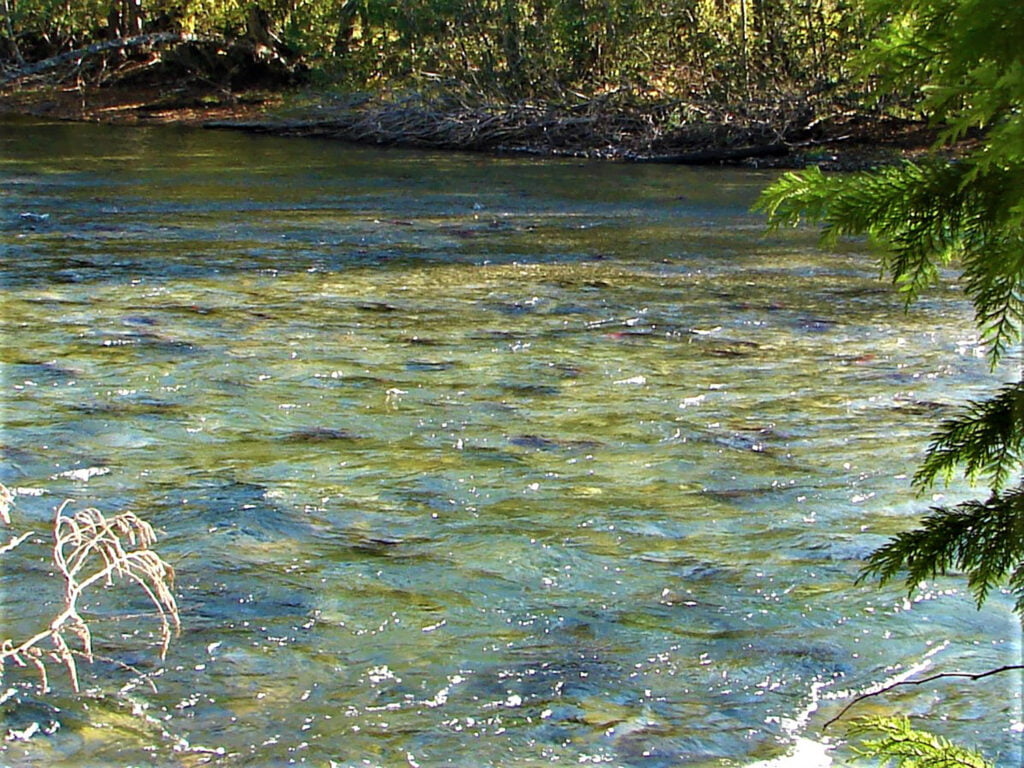 Make no mistake, the salmon are there, nose to tail, side by side, dark shadows just below the surface – and you thought you had missed them. 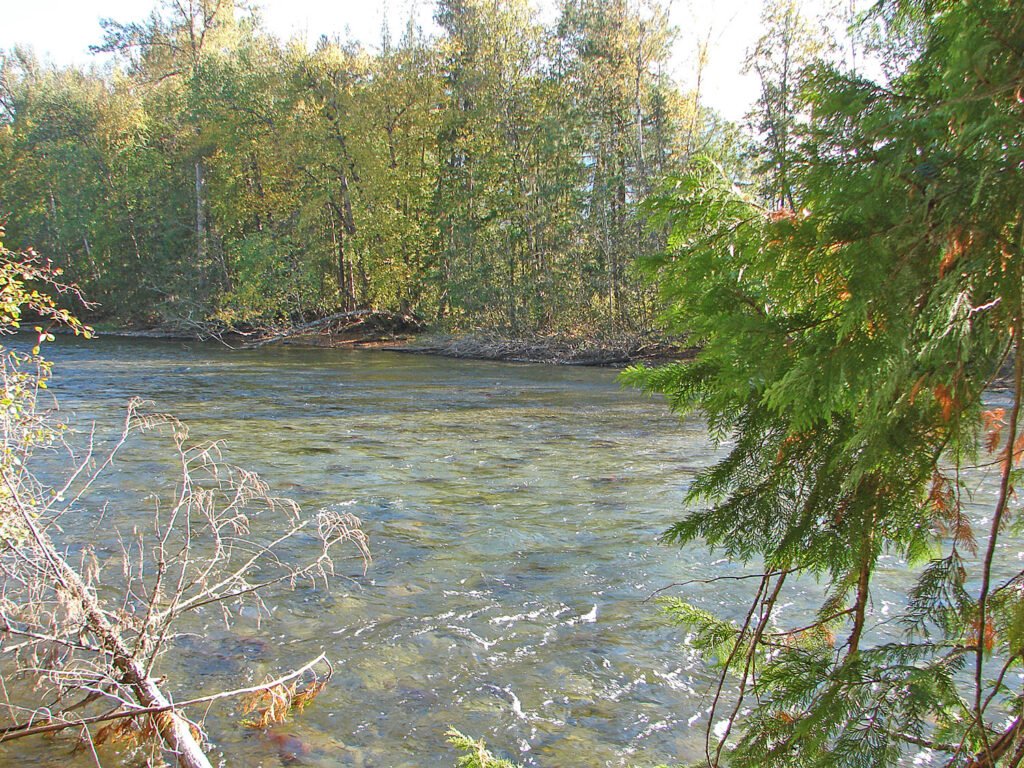 The fish are waiting, resting in brief respite; their turn will come to make the final swim over rocks to their pre-ordained spawning grounds. 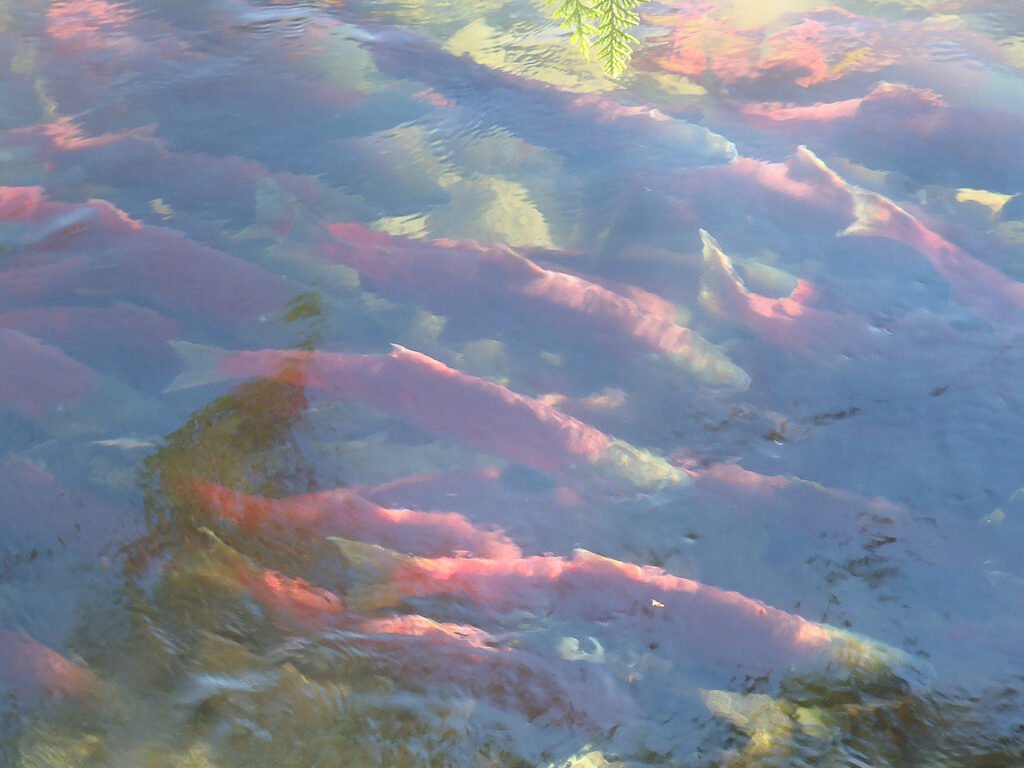 At your feet, there is a deep-water channel as wide as a double car driveway. This deep-water channel is full of salmon. These fish, having rested in the waiting pool for awhile, have now started to move towards their final destination and resting place. 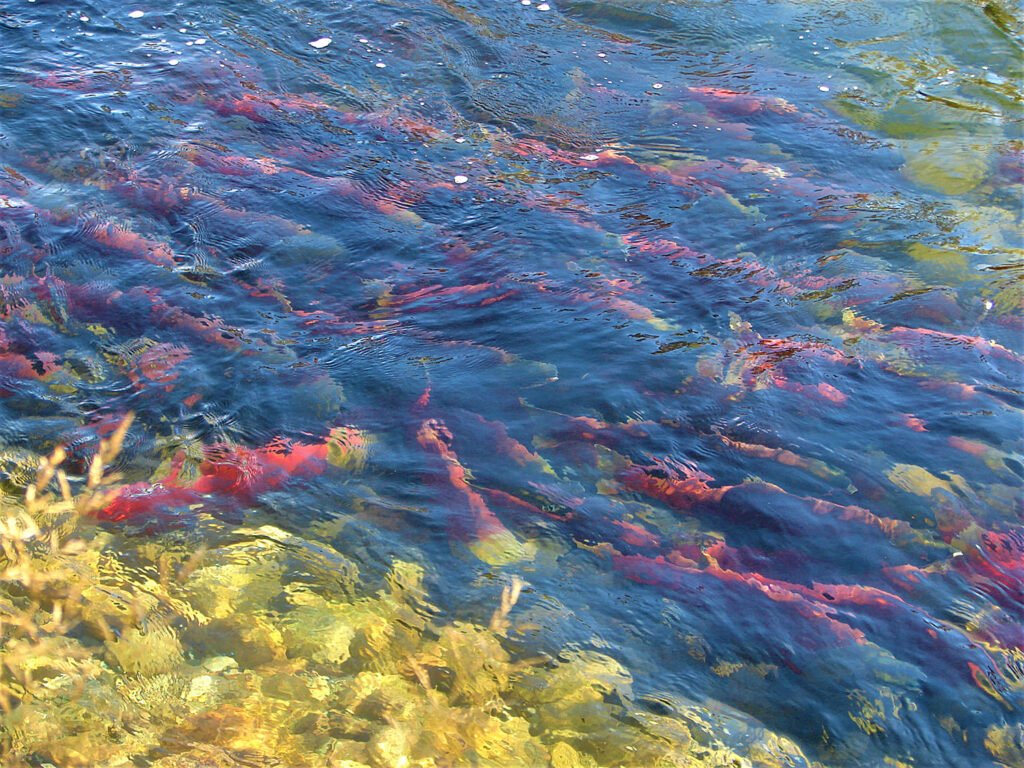 They move in what appears to be coordinated pairs into the shallow waters just upriver, and they splash as they fight their way over the rocks to reach their selected nesting place. 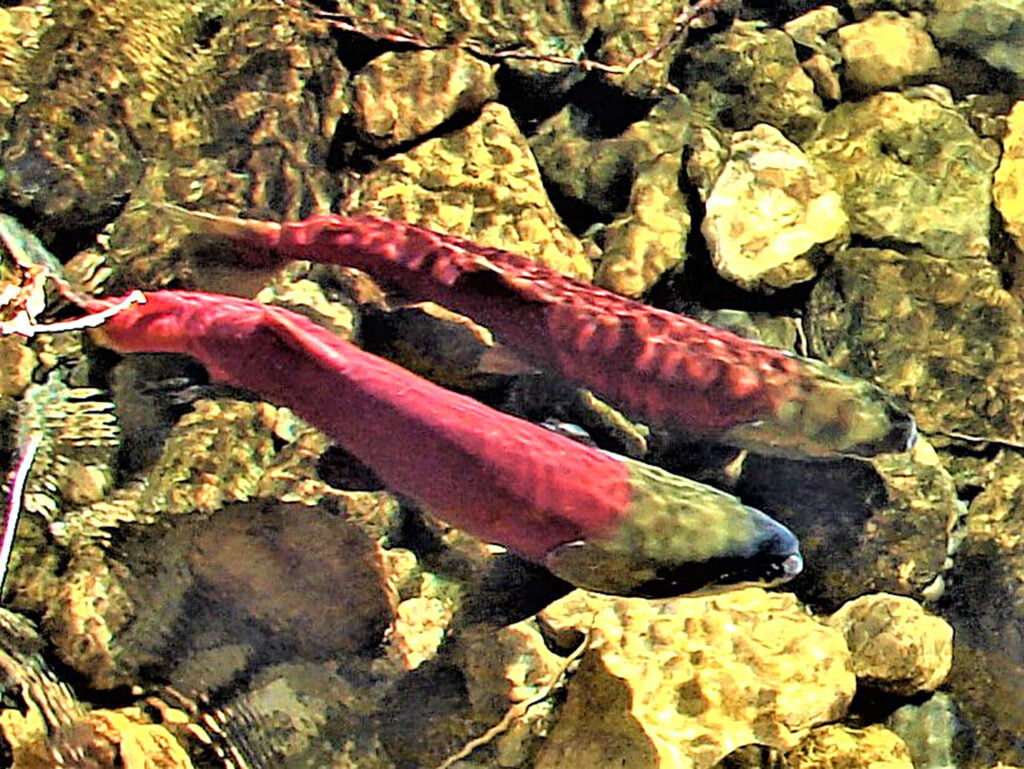 These fish spent the last three to five years out in the saltwater of the North Pacific Ocean, close to Alaska’s shoreline. Now, years later, they have come home to their place of birth to bring about the next generation and see their own end.

The female lays the eggs as the male waits, on guard; then at the right moment, he moves in and spreads his sperm over the eggs to fertilize them. 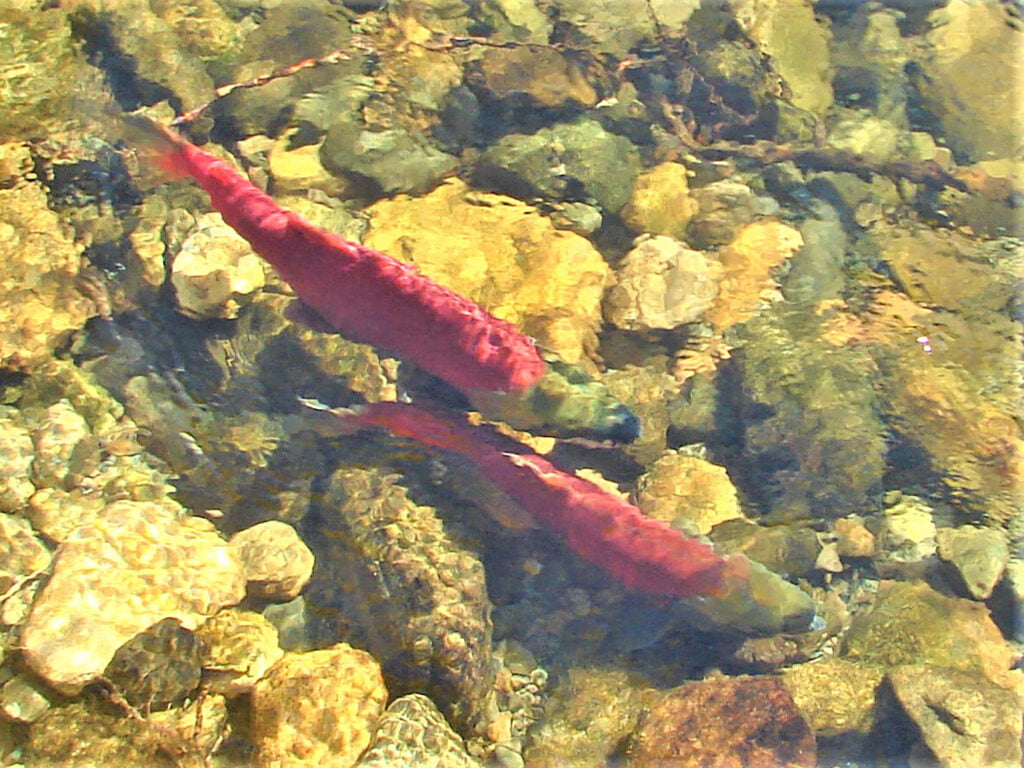 Exhausted parents stand guard for a further 24 hours as the river silt covers the eggs with nutrient-rich sand. Then these dedicated parents roll over and move no more, their decaying bodies offering their last gift to the next generation by adding further nutrients to the river – nutrients that will help build strong, healthy fish ready for a swim to Alaska to continue the cycle that brought them into the world.

These final acts of sacrifice for the sockeye salmon are them passing the baton to their unborn young to take up and it is a privilege to quietly observe as nature takes its course upriver.

Resources for Planning Your Visit 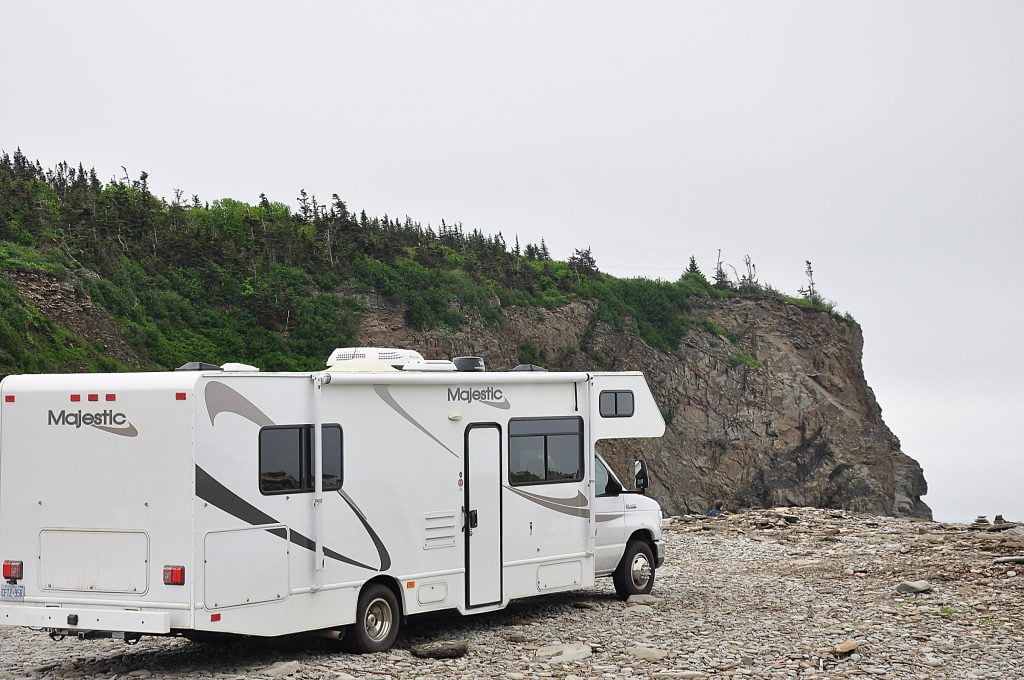 New Brunswick is rich in hands-on experiences with natural wonders and beauty along the shores of the Bay of Fundy. The Bay of Fundy tides are the highest on the planet at 53 feet vertical in the Minas Basin at the closed end of the bay. They are an unspoiled,... 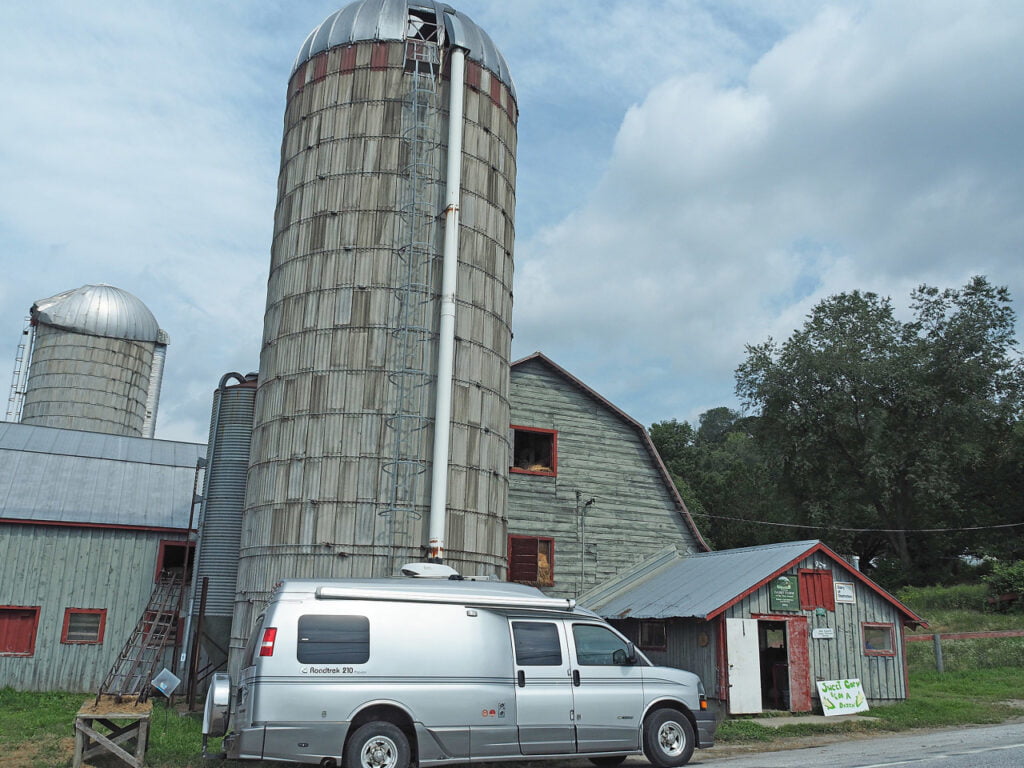 For many Canadian RVers, the dark and cold of winter feels especially long this year. There is uncertainty around the impact of the coronavirus on travel plans and the border sits closed (an especially brutal circumstance for snowbirds who are used to getting away... 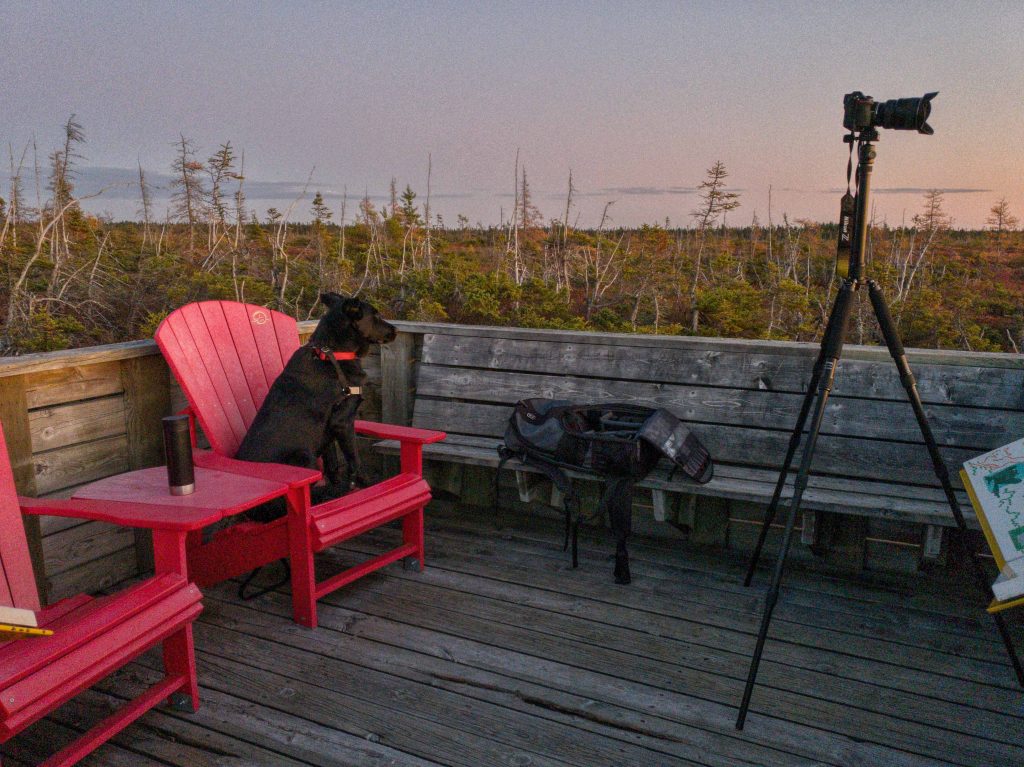