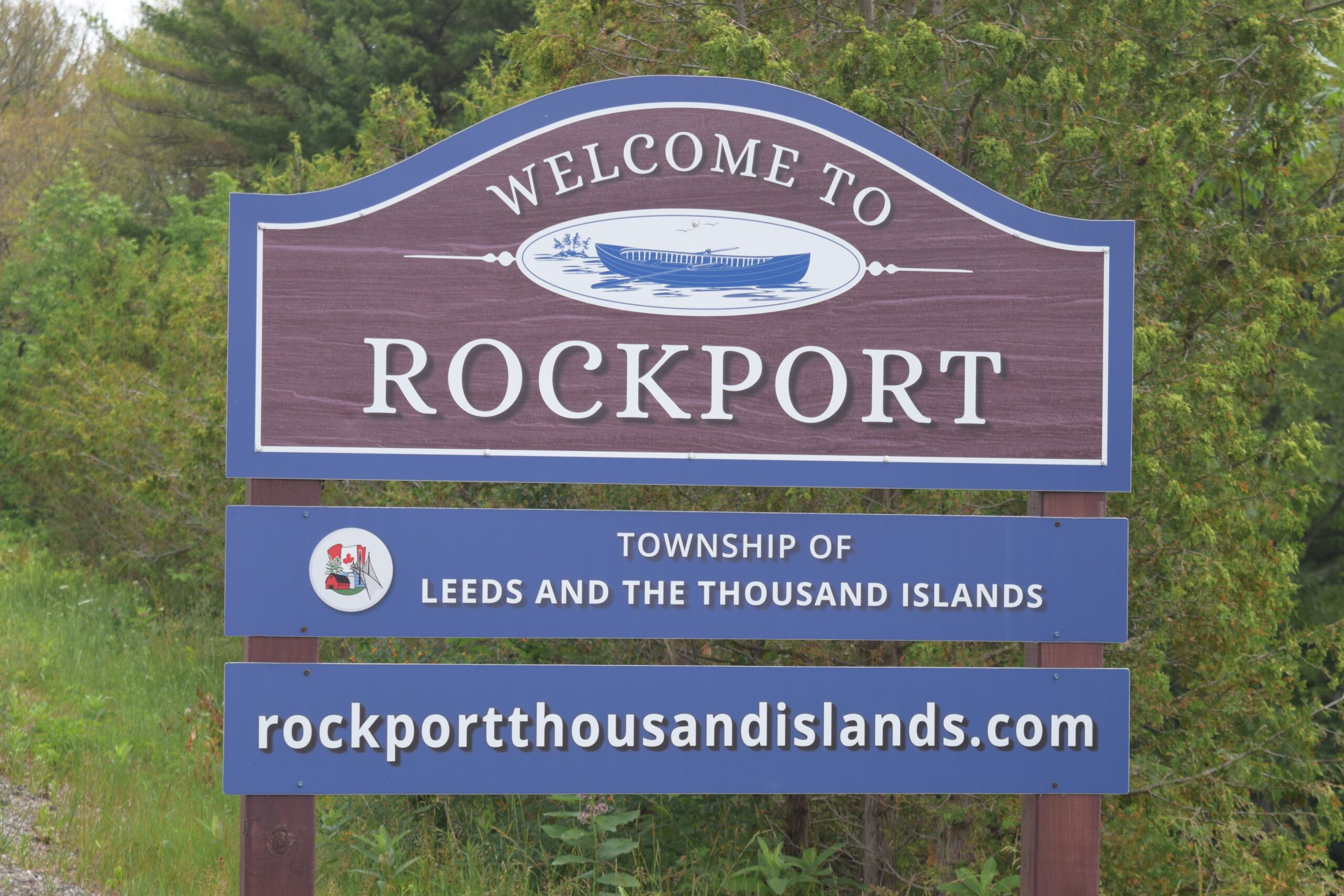 As full-time Canadian RVers, Linda and I have spent 15 of the last 16 winters in the southern USA and Mexico. Unfortunately, the winter of 2019/2020 proved to be the exception. Due to the COVID-19 pandemic, the borders were closed, and like most other Canadians, we spent the winter months ‘enjoying’ the cold and snow here at home in Canada.

Rather than spend the winter in our trailer, we rented a furnished house in Picton, Prince Edward County, Ontario.

Since April, we had been back on our seasonal campsite at Rideau Acres RV Park, , Kingston, Ontario. Now, it was the first weekend of July the COVID-19 lockdown had just moved to stage two. Both Linda and I had received our second COVID-19 vaccinations, and we were definitely ready to explore. We planned a day out, a one-hour drive in our truck, followed by a leisurely bike ride on the relatively level and picturesque 1000 Island Parkway, and cycle path and then lunch on the patio of the Cornwall Pub in Rockport.

With our bikes loaded onto the truck carrier, we set off to discover the village of Rockport, Ontario, and the secrets of ‘the 1000 Islands.’

The Bays and Inlets of the Saint Lawrence River 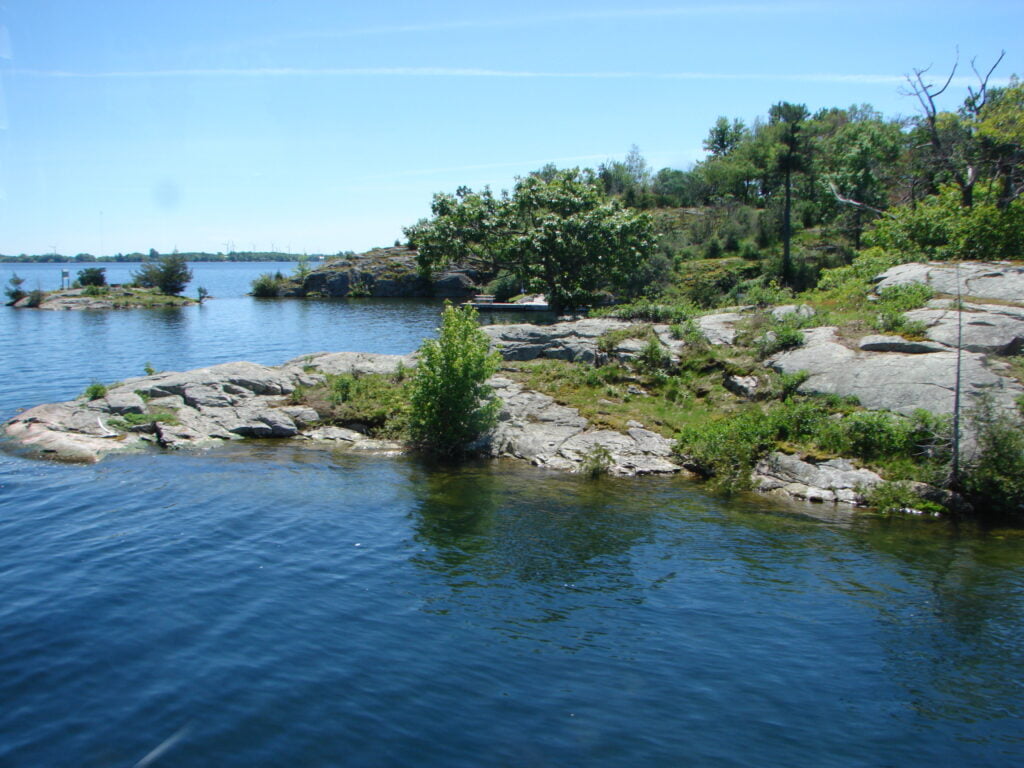 The secret bays and inlets of the Saint Lawrence River hide a rugged coastline of granite and limestone rock formations, forest, and coarse grasses. The 1000 Islands region is a protected wilderness of coniferous forests, lakes, and rivers – home to thousands of different wildlife species. 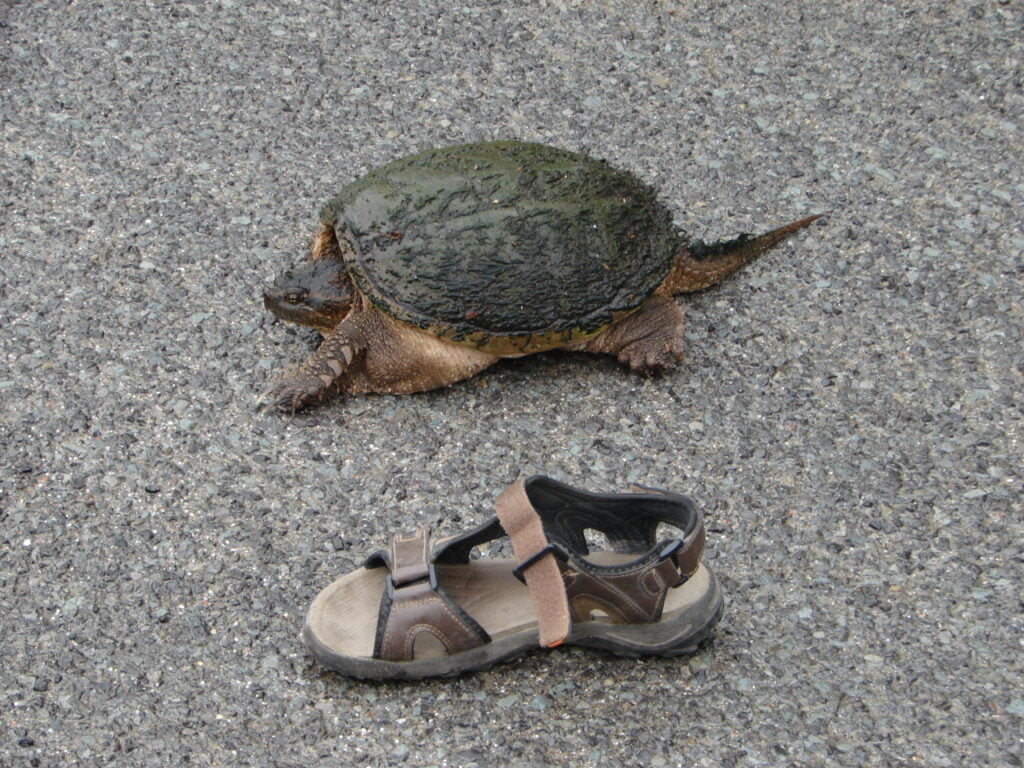 We stopped on the cycle path to allow a turtle to cross, upon taking a picture, I used my size 9 shoe to illustrate its size. In addition, the 37 km of cycle path runs alongside the winding parkway with numerous parking areas. Areas where cars can be safely left while you ride your bike, walk, or run, enjoying the region.

Mariners of the 17th century gave the region its name, ‘The 1000 Islands.’ They had to negotiate the narrow channels in sailing ships, between rocky outcrops of granite, carved and polished by the last ice age. There are over 1,800 rocky islands, some of which are too small to support trees.

Car drivers turn their heads dangerously to admire nature’s natural beauty and man’s handicraft alike. The area has limited the construction of individual homes. But the homes here are in locations that place them beyond the financial reach of most people.

Cyclists and pedestrians follow the cycle path. A paved cycle pathway separated from the road traffic by a three-metre grass verge. Cyclists travel at a casual pace enjoying the scenic views, the pleasing smells of fresh water, and the forest – aromas that in July drift on a warm breeze. Alternately, the users of the cycle path travel with that determination aimed at beating their personal best at a distance covered or the speed. 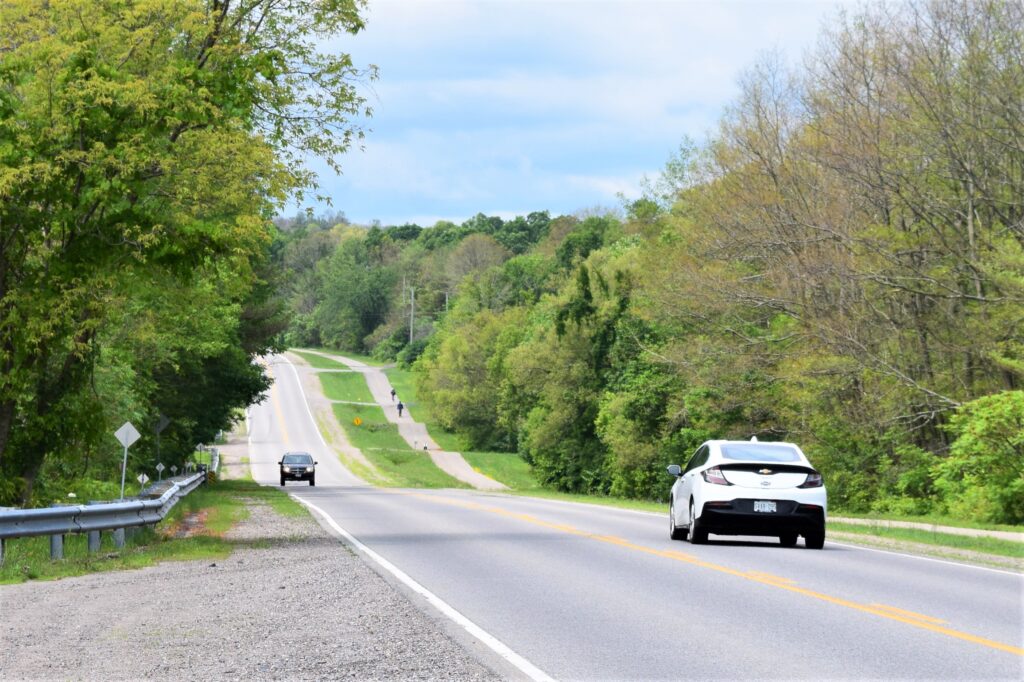 As for ourselves, we rode side by side, chatting and laughing in the morning sun, just appreciating the ride and each other’s company.

Out on the Saint Lawrence River, pleasure boats travel the magnificent waterway in both large and small craft sizes. These boats wind their way through channels dotted with lighthouses and marker buoys. Buoys that mark the hazardous, both above and below the surface.

In the 17th century, as European explorers pushed West, the 1000 Islands region was a dangerous place for these early mariners. Then, as taxation increased and governmental laws restricted imports of certain products, farmers and merchants turned to an older trade to supplement their income. Shipwrecking! Piracy! And, smuggling…

Rockport lies approximately halfway between the cities Kingston and Cornwall, Ontario, nestled on the north bank of the blue/grey waters of the St. Lawrence River. An 18th-century village established by the arriving United Empire Loyalists which consisted of men and women who had accepted land in Canada in return for their support of the Crown in the fight with the American colonists. 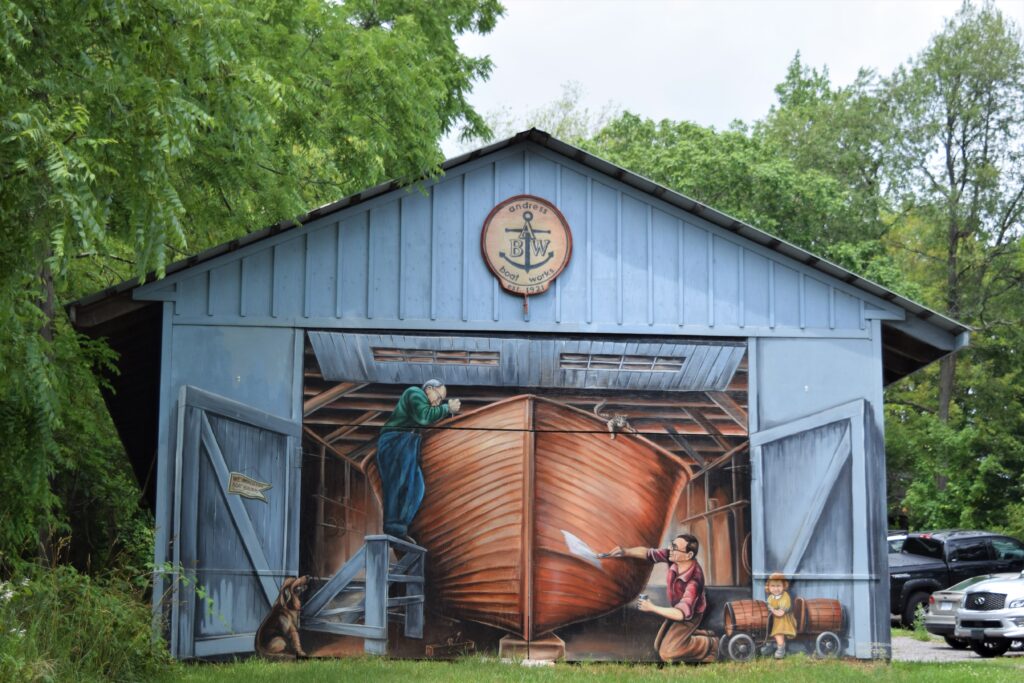 With their green and white siding, the village buildings display the relaxed lifestyle of a bygone age. Notice boards and painted murals around the village display many of Rockport’s memories, photographs, and wall paintings. Memories of boat building, the customs post, and river traffic are common themes. 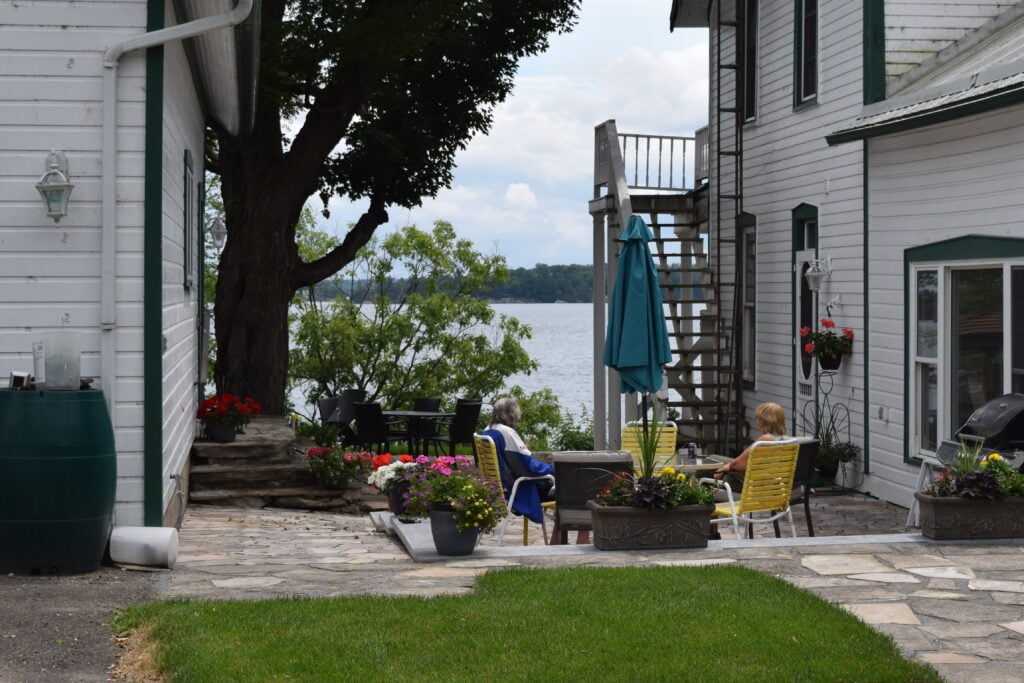 A working General Store and the The Boathouse Country Inn and Cornwall Pub add to the atmosphere. The Cornwall Pub was only open for patio dining when we visited at the time. 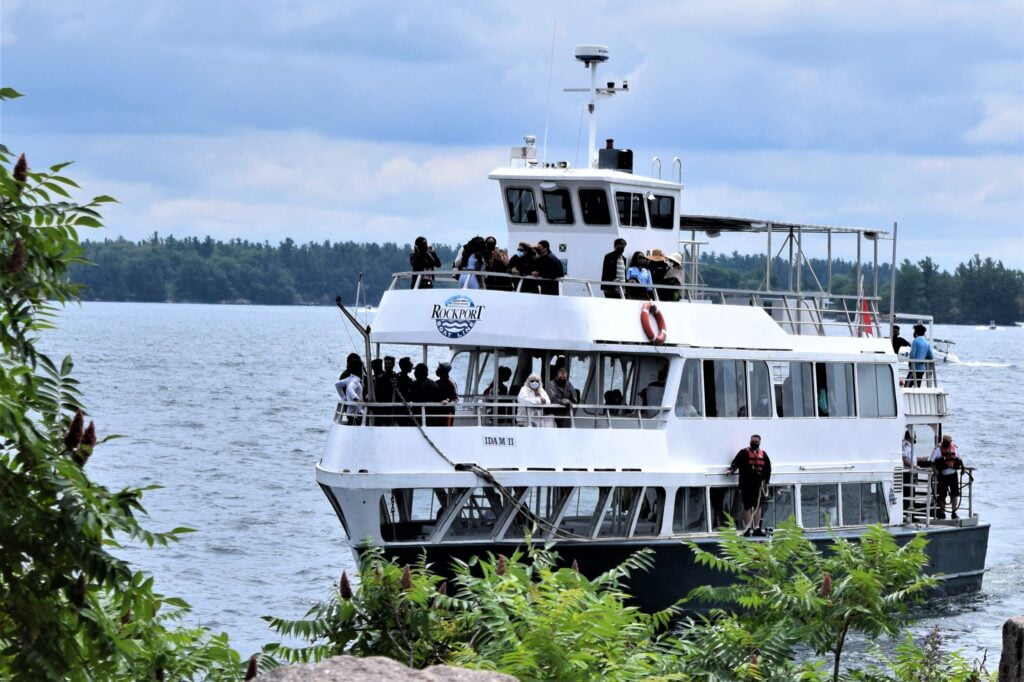 Today the village caters to the Rockport Cruise Lines with boats that have upper and two lower decks making it a river sightseeing pleasure during any weather. The Rockport Cruises operate various river trips, sightseeing tours to view the islands and the waterways, the homes, estates, and a castle built on the Islands and river shoreline.

Tourists returning from the river can purchase lunch or supper at one of Rockport’s restaurants or enjoy a drink on their patios.

After our morning bike ride, Linda and I drove into Rockport for lunch at the Cornwall Pub. There is a bike rack located outside the Cornwall Pub allowing cyclists the opportunity to dine. 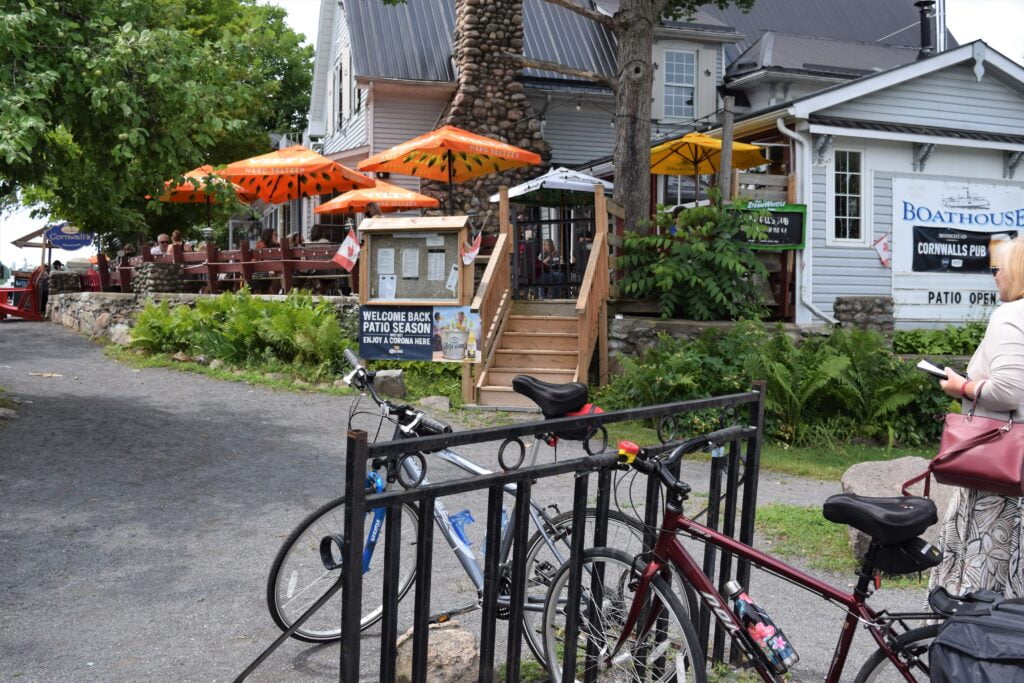 Passengers from the cruise line had filled the car park when we arrived. A man dressed all in black complete with a black mask, assisted us in finding a parking space for our big truck with its bike rack. 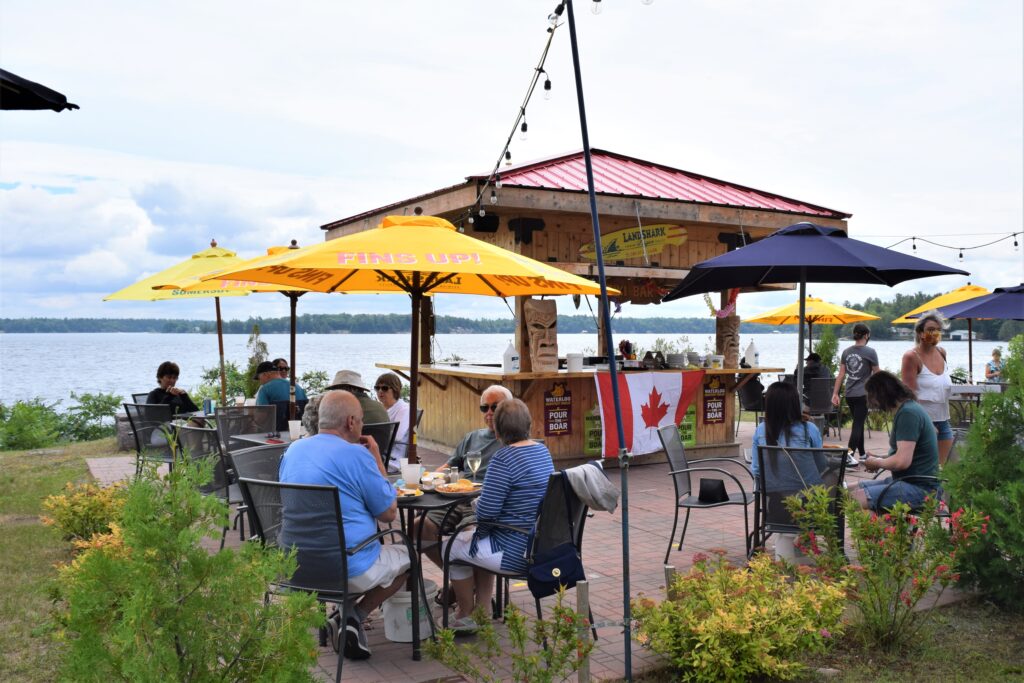 On the grass patio, there is a Tiki bar selling drinks surrounded by dining tables and looking across the river into the mist, we could make out the American flag on the river’s far bank. 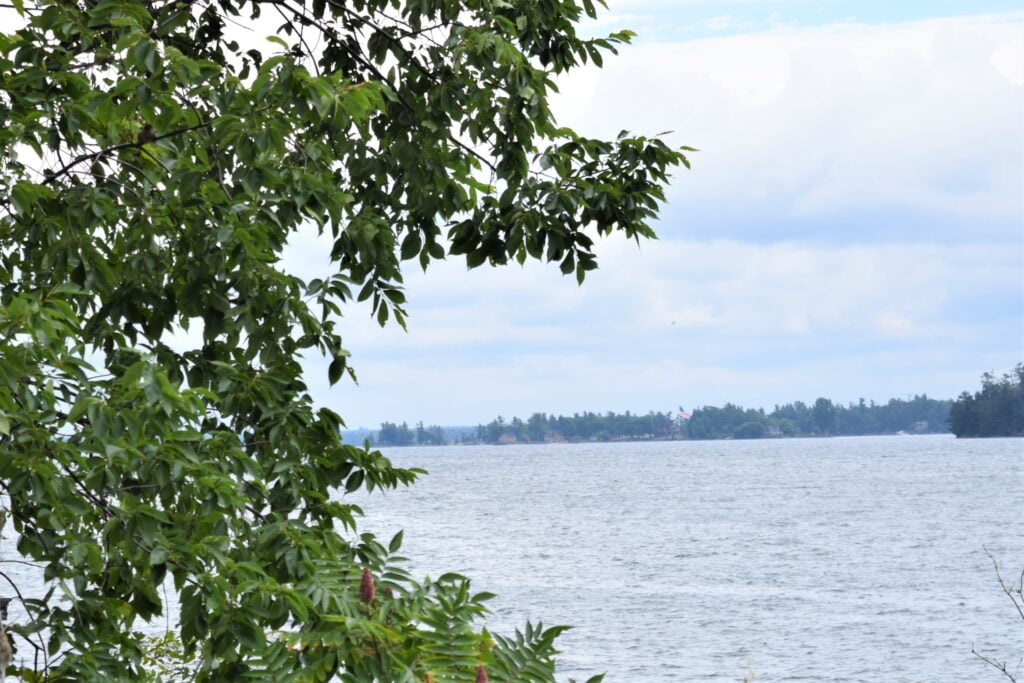 We could see the USA as we waited for our server in Canada. From our table it was easy to imagine life in the region some 200-years earlier.

Avast There! Me Hearties

A deep voice behind me brought me quickly back to the present. “Avast there! Me Hearties.” A pirate? I thought as I spun around. It was not a pirate, however, for he had no eye patch, but rather it was the man in black from the car park.

It was Stage Two, following the COVID-19 lockdown. The waiters wore masks. We also wore masks before being seated at our table. The man in black ended up being our waiter. And we chatted as we ordered fish and chips (what else?). 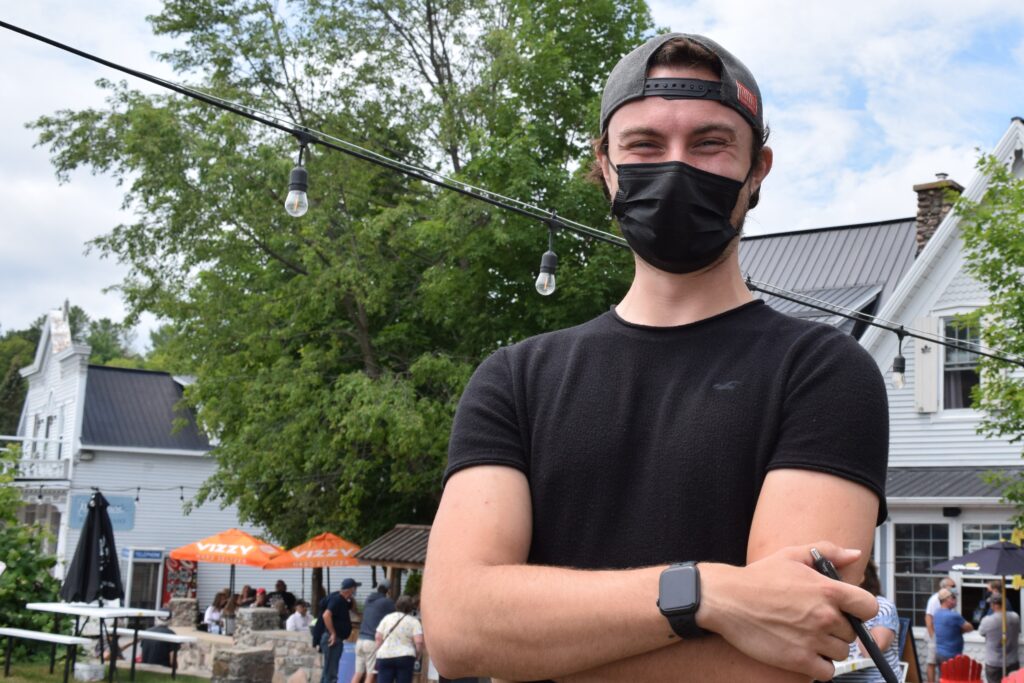 “Did you know,” he continued as he took our order, “Off-shore, running through the water, yet never touching one of the islands is the international border. This line separates this part of Canada from the USA.” Then he slowly looked to his left and then his right before speaking another word. 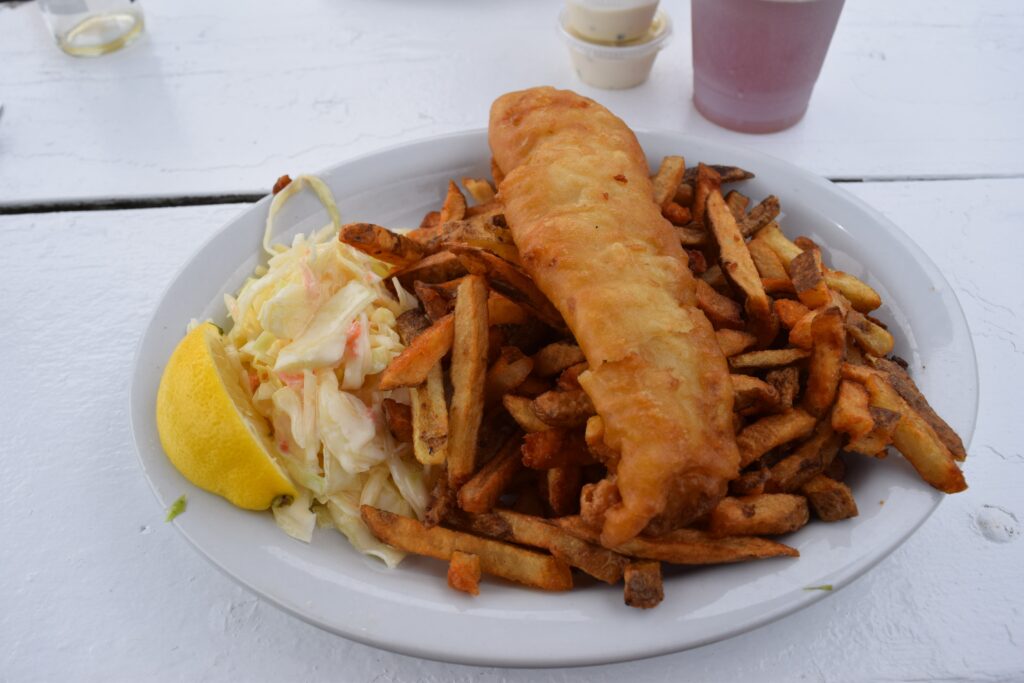 “What do you get?” he whispered. “When you have a border between two countries like this?” He waved his arm, gesturing to the islands and the bays. He looked at us, waiting for our answer. Then, in mock exasperation, he exclaimed. “A border, with all these islands and inlets, and then when you also get the dark of the moon?” He paused once more for dramatic effect. “Bam!” he shouted and slapped his hand down hard on the rough wooden table.
We both jumped, and he laughed, exclaiming: “You get pirates!”

Coastal people in the 17th and 18th centuries saw nothing wrong with the practices of shipwrecking, piracy, and smuggling. Pirates roamed the Saint Lawrence River in search of defenseless ships. They would lure ships to their death on the rocks in bad weather, then remove any cargo from the holds.

Bill Johnston was one such pirate, born in Quebec and credited with numerous attacks on ships in the Saint Lawrence River. In 1838 he and his pirate crew attacked the British steamer ‘Sir Robert Peel’. He did, however, conscientiously take all the passengers safely to the American shore – after first relieving them of any valuables if course. The ‘Sir Robert Peel’ had been carrying gold to pay the British Garrison in Toronto, and after looting the ship, Bill Johnston’s pirates burnt the ‘Sir Robert Peel.’ To date, nobody has admitted finding this gold. Well, would you?

There Be Treasure on them there Islands

Before the opening of the Saint Lawrence Seaway, a canal system opened in 1959. European ocean-going ships had to dock at Quebec City and Montreal and transfer cargo to smaller vessels for transportation to Toronto. Pirated goods sold without duty at a below-market price were big business in those times and pirates attacked many ships in the 1000 Islands area, hiding much of the non-perishable pirated goods on the off-shore islands for retrieval at a later, safer date.

The later date never came for pirates that got caught, and the hangman’s noose finally hid the locations of buried treasures.

There are many tales of buried gold, silver, and jewelry found hidden in recesses of the rocks of the 1000 Islands. On some of the islands where there is a shallower soil layer, stories have surfaced of daylight discoveries. Rumors exist of local families getting rich after finding barrels of gold, silver, and jewelry; the spoils and ill-gotten pirated wealth taken at sea and buried during raids and robberies in the 17th and 18th centuries.

The 1000 Islands: a Smuggler’s Paradise

With the USA and British/Canada having different governmental tax systems, prohibition in the USA, and higher taxes in Canada, ‘the 1000 Islands’ area became a perfect breeding ground for smugglers. From the mid-17th century to today, tobacco, alcohol, animals, and gold have all been successfully smuggled across the river.

Today, there are place names that readily invite exploration; road names that indicate a shady past and trails that lead to hidden coves. You can wander the side roads and woodland trails, cruise the river, take a small boat and look for hidden coves and harbours; this is all part of the fun of ‘the 1000 Islands.’. 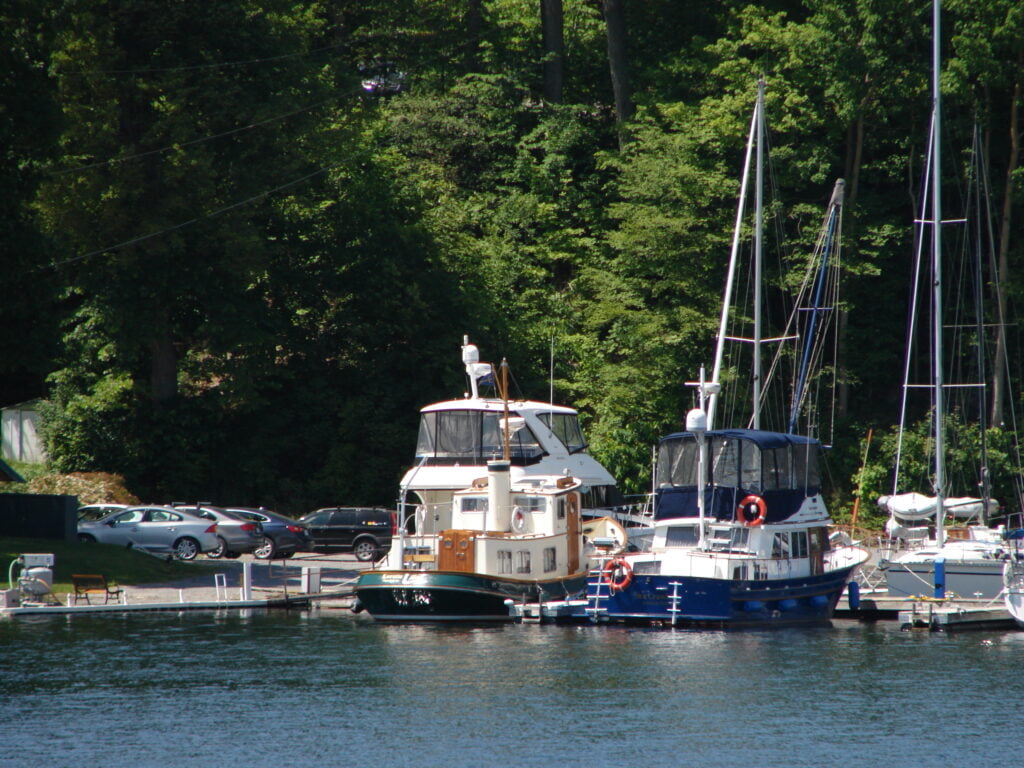 A day out on the 1000 Island Parkway is a time to indulge yourself and dream. Our order of fish and chips with a glass of beer was served with plenty of ‘salty’ pirate tales while overlooking the Saint Lawrence River and ‘the 1000 Islands,’ with the USA coastline visible in the distance. Rockport is a village that dates to the days of river piracy and smugglers, and sitting here, you are free to imagine the thrill, the romance, the adventure, and the treasures to be found, if only in your mind. 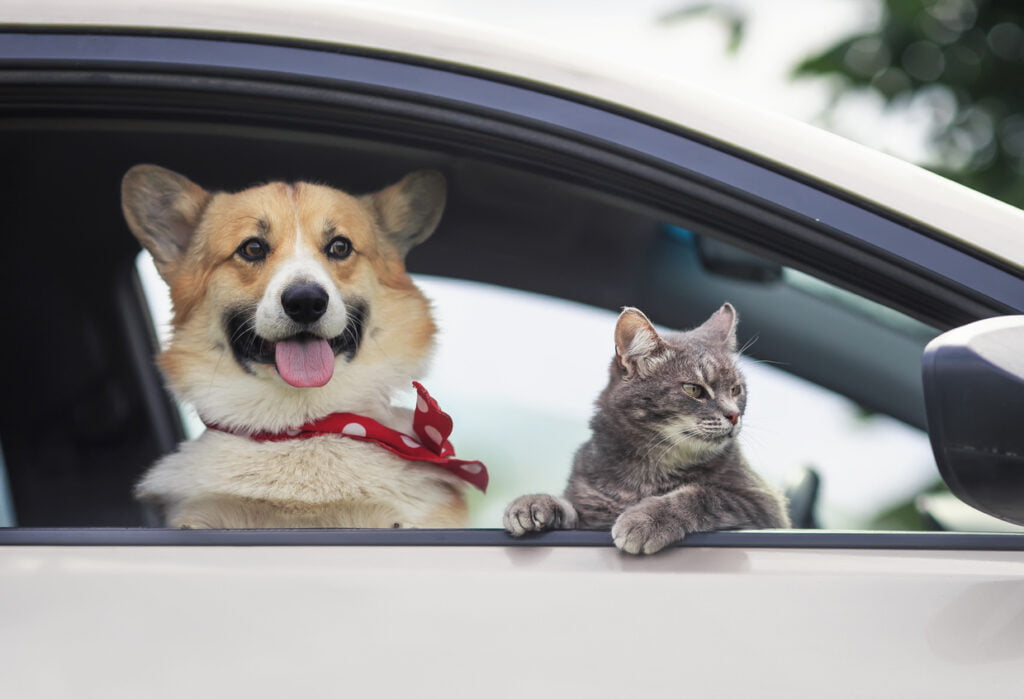 RVing is a family adventure, now more so than ever as younger families and extended families are taking to the road as well as a smart solution to summer travel plans. And as we know from our own families, certain family members have different or increased needs... 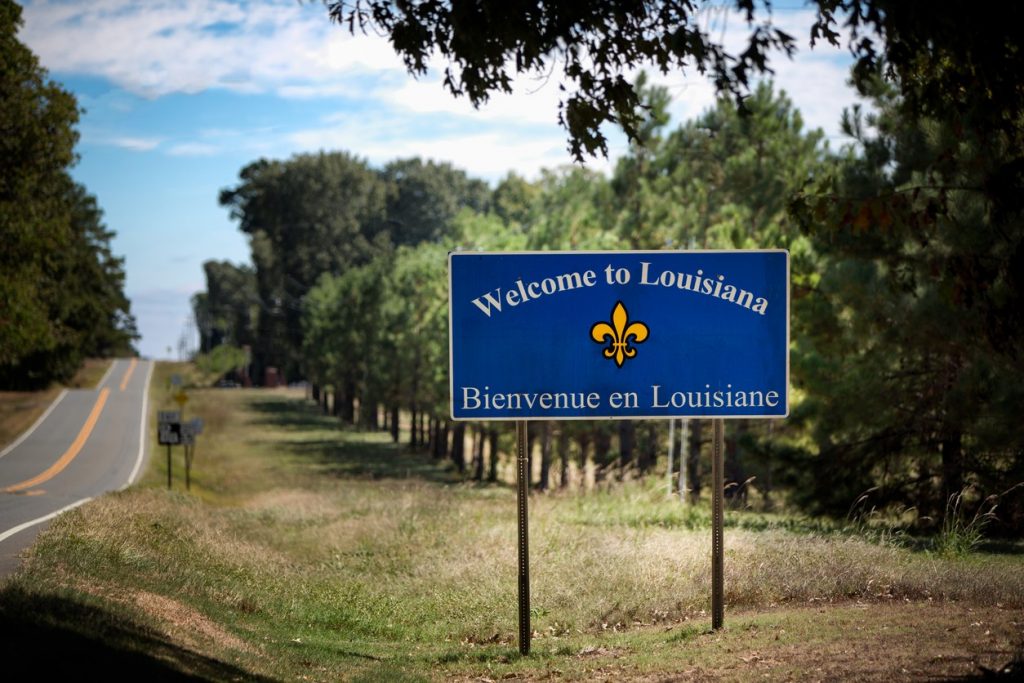 In our North American travels, Linda and I have passed through Louisiana several times but have never stopped. Yet Louisiana’s history and culture are unique and inviting. As part of our February, 29 day RV road trip, we chose to make a four-night stop using... 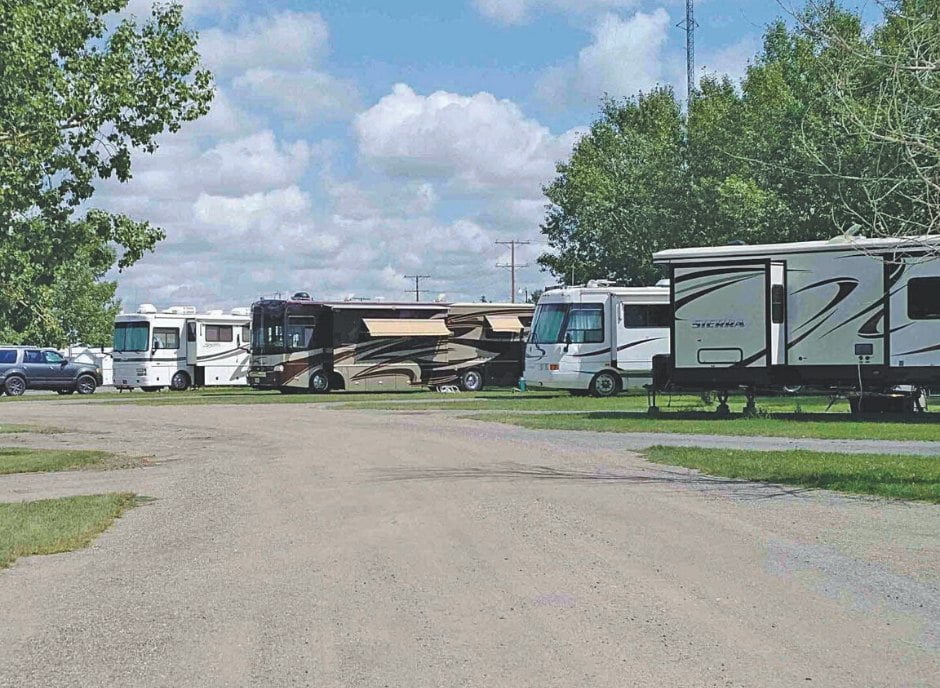 Among the many wonderful aspects of RVing are our choices regarding where we park our units. Whether we define ourselves as fulltimers, weekenders or somewhere in-between, staying at a seasonal site provides us with a base camp and a launching-off...