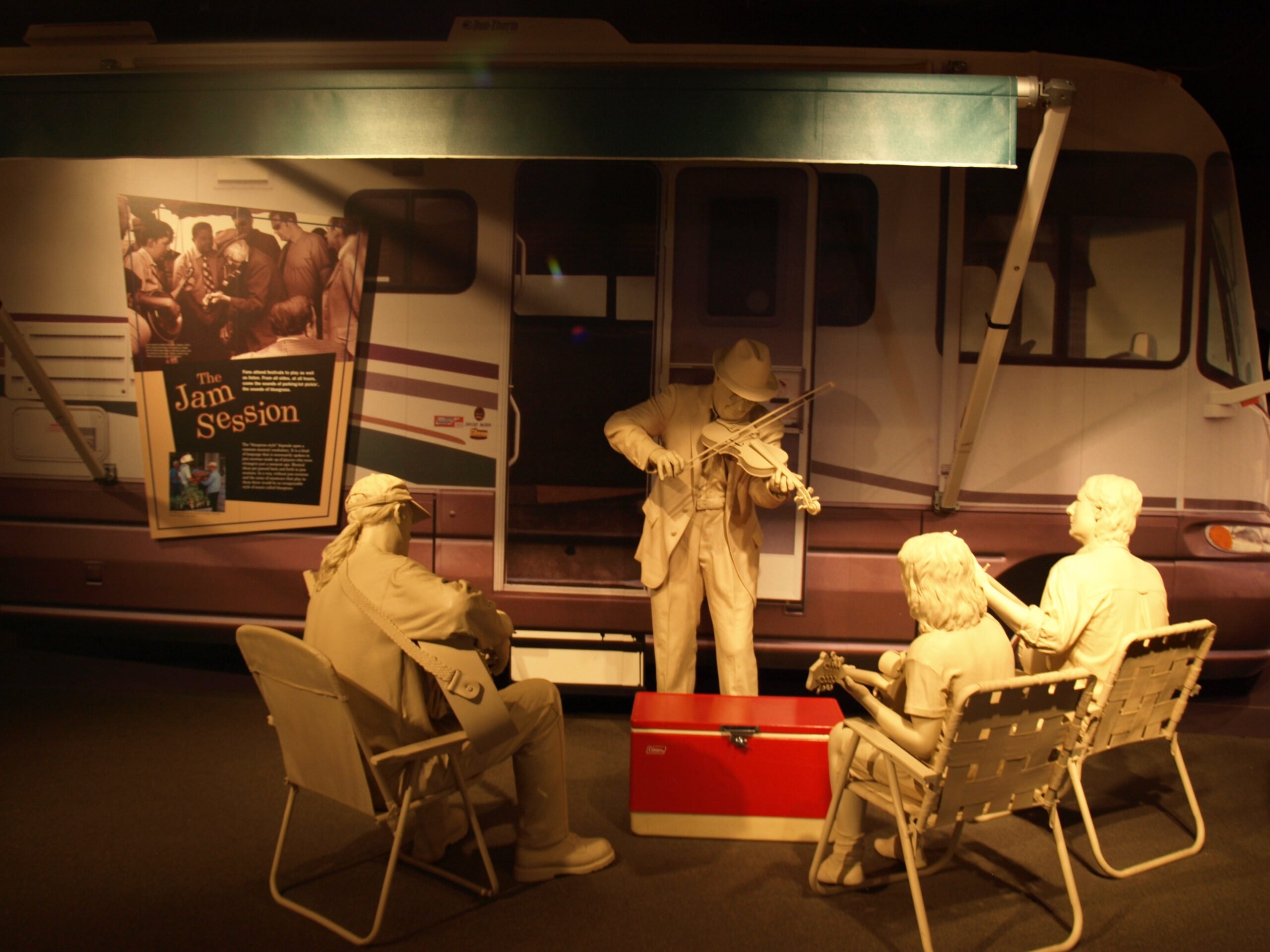 M​usic is “the universal language” and it certainly appeals to a large cross-section of travellers. One of America’s gifts to the world has been its roots music – it’s said that jazz, blues, and rock and roll are America’s great contribution to world culture. From the sorrowful sound of the blues born in the Mississippi Delta to the hard bop rhythms and lyrics of soul, the states of the U.S. have produced a wealth of talent and a diversity of musical styles.

In Canada, there are fewer music museums – but just as impressive – dedicated to the universal appeal of music. The stories of music are told at museums and recording studios across Canada and the U.S. Here are a few music museums you won’t want to miss while on your RV road trips.

B.B. King Museum and Delta Interpretive Center (Indianola, MS) is built onto an old brick cotton gin where young Riley (his real name) sharecropped and drove a tractor before evolving into Blues Boy King and changing music history. In the early 20th century, the blues was the soundtrack for a Mississippi Delta Saturday night and B.B. King was at the heart of it. This music museum is filled with items from his personal archives – instruments, personal papers, photos and video clips, and even his 60s-era tour bus. Musicians will want extra time to play around in the Guitar Studio. 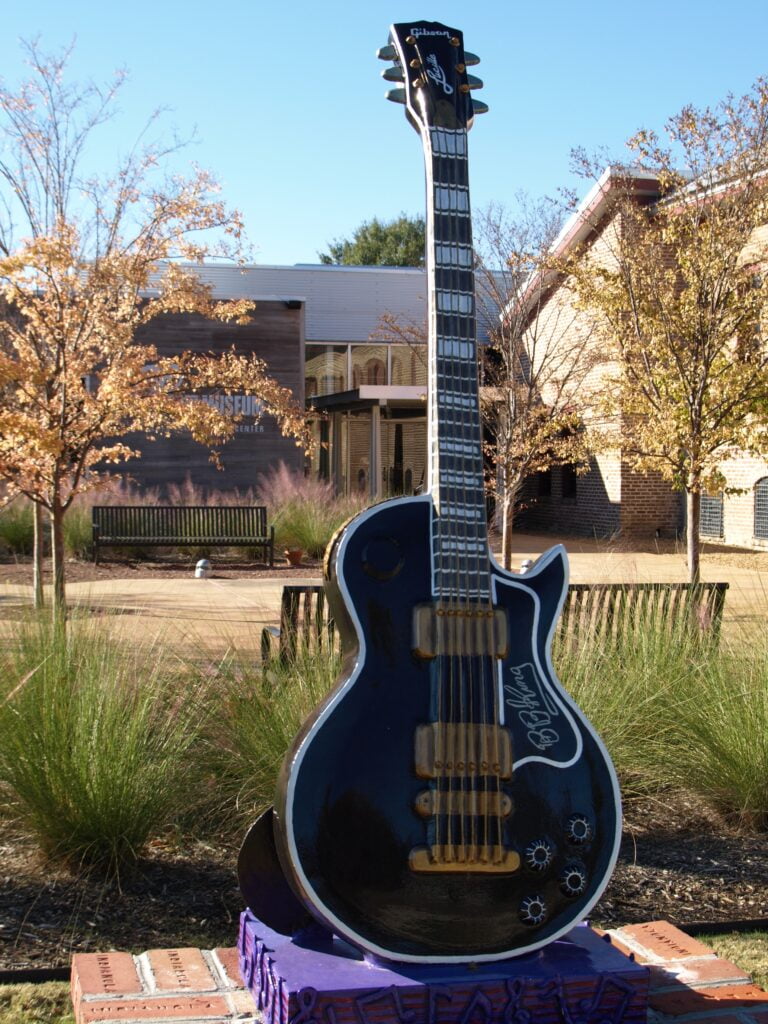 The Delta Blues Museum (Clarksdale, MS) is Mississippi’s oldest music museum and the world’s first music museum dedicated to the blues. The main history gallery is filled with photos, posters, stage wear, instruments, and memorabilia tracing the blues across the Delta and the key players who travelled through the region. A highlight is the remnant of the cabin where blues musician Muddy Waters lived during his days as a sharecropper and tractor driver. Best known for electrifying the blues in Chicago, ZZ Top musician Billy Gibbons had a timber from Muddy’s shack made into a guitar in his honour.

The W.C. Handy Museum (Florence, AL) was established to celebrate the life of musician and composer W. C. Handy, the “Father of the Blues.” The author, publicist, composer, bandleader, and musician was born in the restored two-room log cabin that now houses a large collection of memorabilia, instruments, personal items, and objects from his musical career. 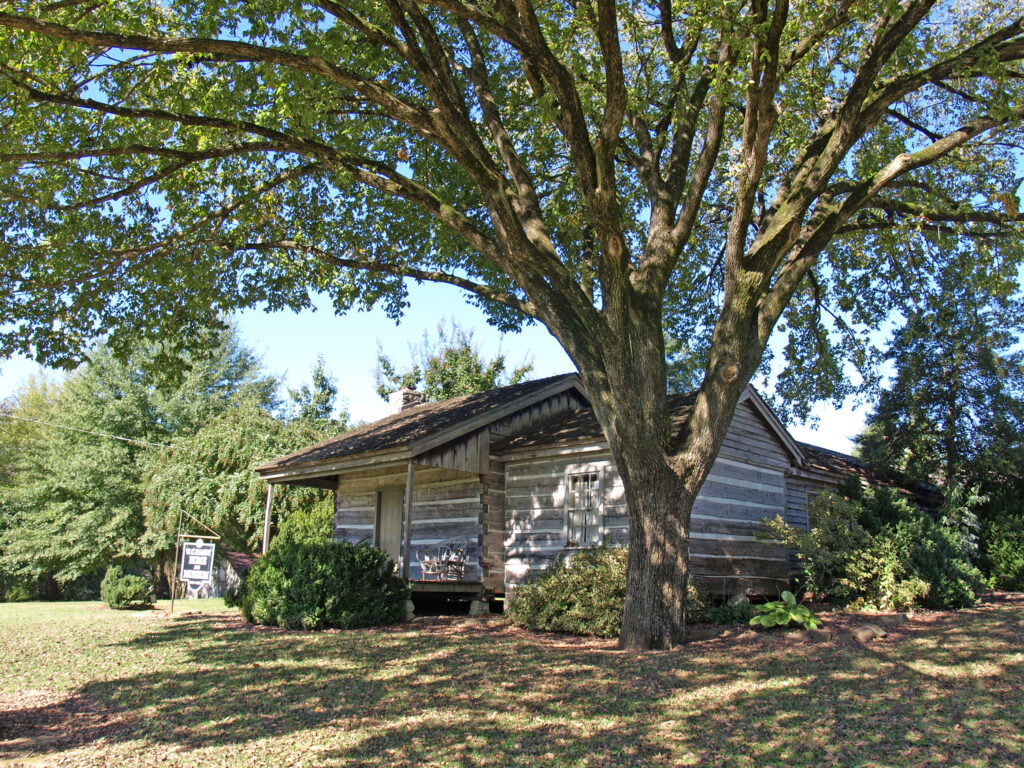 Gateway to the Blues (Tunica, MS) is housed in an old wooden train station, significant because the blues extended out from the Mississippi Delta from a depot just like it. The galleries are filled with priceless instruments and memorabilia, creating a multimedia, archive-rich, and information-packed introduction to the roots of the Mississippi blues. The galleries explore the definition and origin of the blues, why it took root in the Delta, and how the music evolved and grew over time. Hundreds of items are rotated through the display cases, including dozens of instruments, original sheet music, a vest worn by Jimi Hendrix, and the simple wooden grave marker from the final resting place of “Memphis Minnie.” 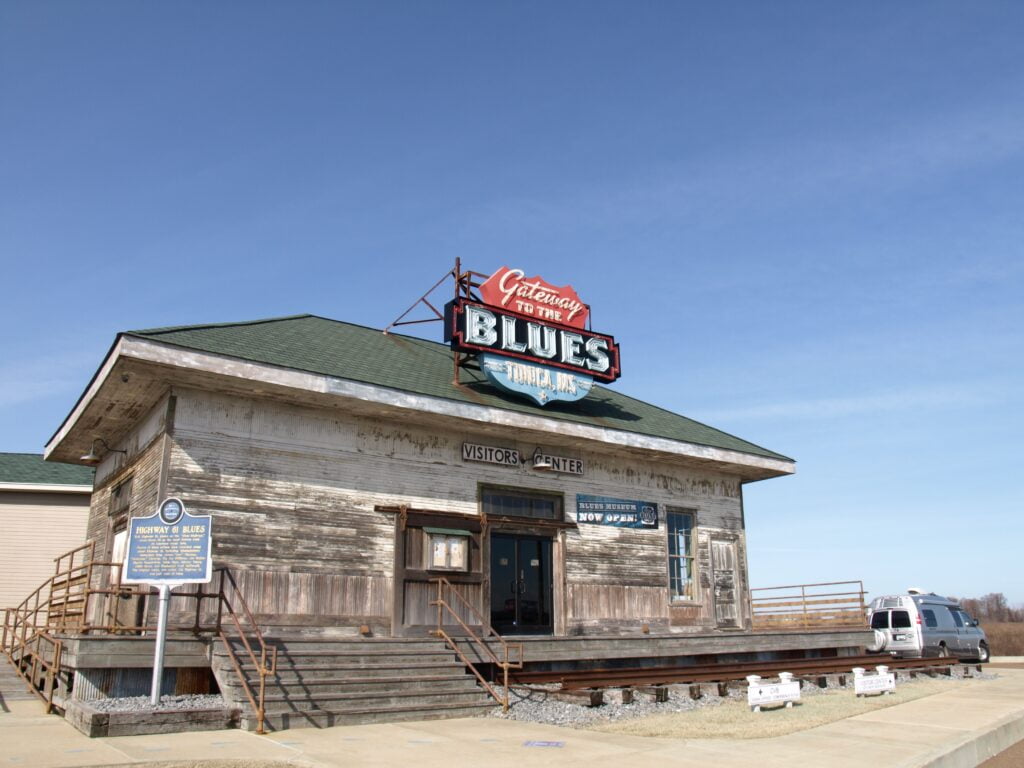 The Blues Hall of Fame Museum (Memphis, TN) preserves the blues and recognizes the artists instrumental to the blues. The immersive galleries use multimedia video and audio displays to tell the stories of blues music from the early days of Son House and Robert Johnson, through the classic period of Lead Belly and Bessie Smith, and into the Chicago blues of Muddy Waters and Howlin’ Wolf. There’s an impressive collection of blues memorabilia including Bonnie Raitt’s brown bottle guitar slide, Howlin’ Wolf’s small travel suitcase, Muddy Waters’s tour jacket and hand-written lyrics, and a bow tie belonging to Willie Dixon. 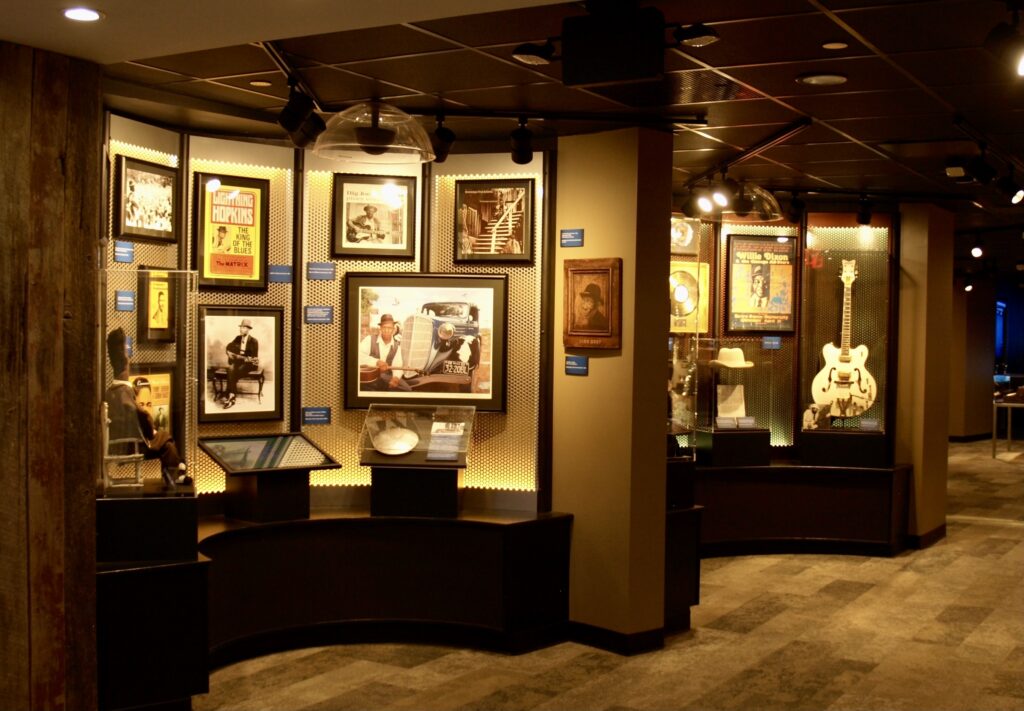 Highway 61 Blues Museum (Leland, MS) pays tribute to the blues musicians with a collection of posters, guitars, clothing, and records. A very organic collection honours local musicians and their part in keeping the flame alive. Not to be missed are the colourful murals painted on the walls of several downtown buildings. 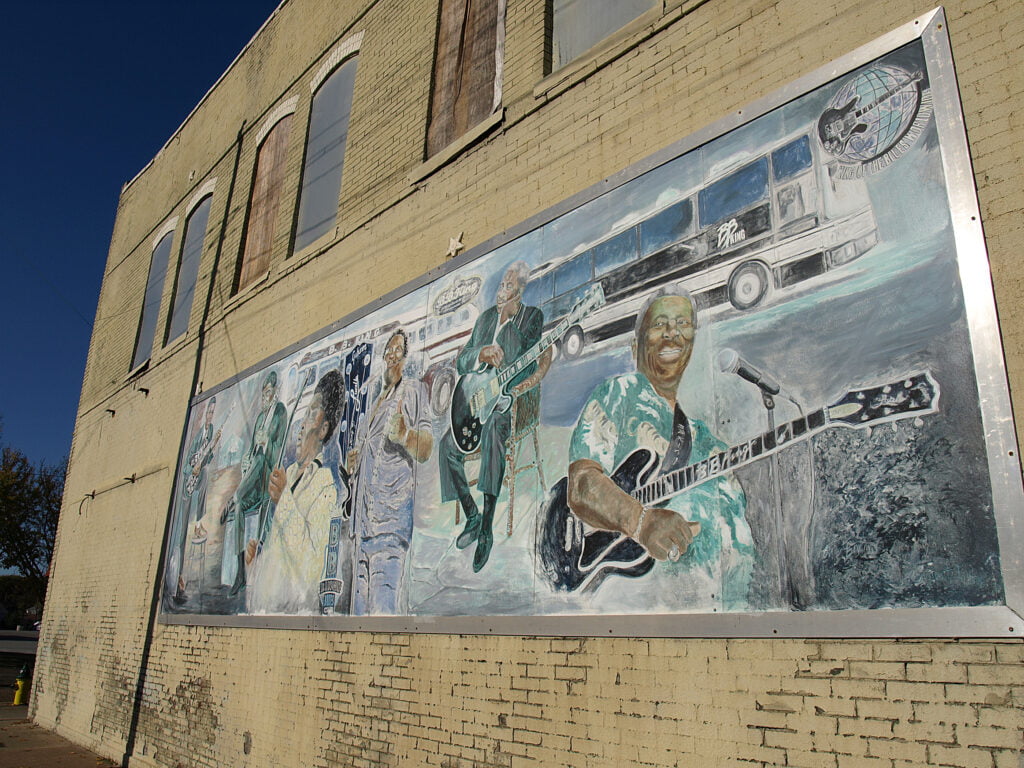 Willie Dixon’s Blues Heaven Foundation (Chicago, IL) is a small music museum dedicated to the legacy of the Mississippi-born bassist and songwriter whose contribution to Chess Records’ artists propelled the blues from Chicago, across the Atlantic and to the world.

National Blues Museum (St. Louis, MO) dives deep into the blues, recognizing and celebrating the classic rhythm and storytelling of the genre as the foundation of modern American music. The museum pays tribute to the musicians who created and continue to advance the art form. The self-guided format allows visitors to browse the photographs, artifacts, audio, and video clips – all testament to how the blues influenced most forms of popular music.

Stax Museum of American Soul Music (Memphis, TN) is the only full-fledged soul music museum in the world. Soul was secular music heavily influenced by blues, gospel, and country sounds – a groove that “stirs your insides and shakes your outsides.” In 1960s racially divided Memphis, Stax was a desegregated enclave where Black and White musicians were able to work, create, and socialize together. 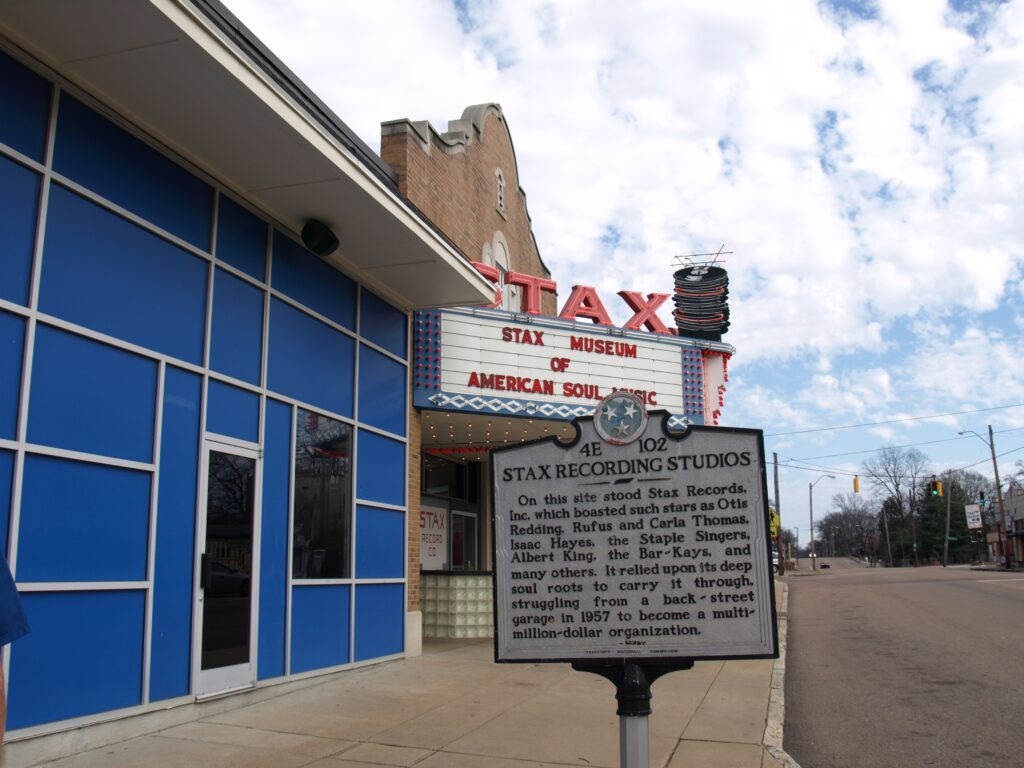 The house session players – Booker T. and the M.G.s – laid down arrangements for soul and R&B giants including Sam and Dave, Otis Redding, The Staple Singers, Wilson Pickett, and Aretha Franklin. 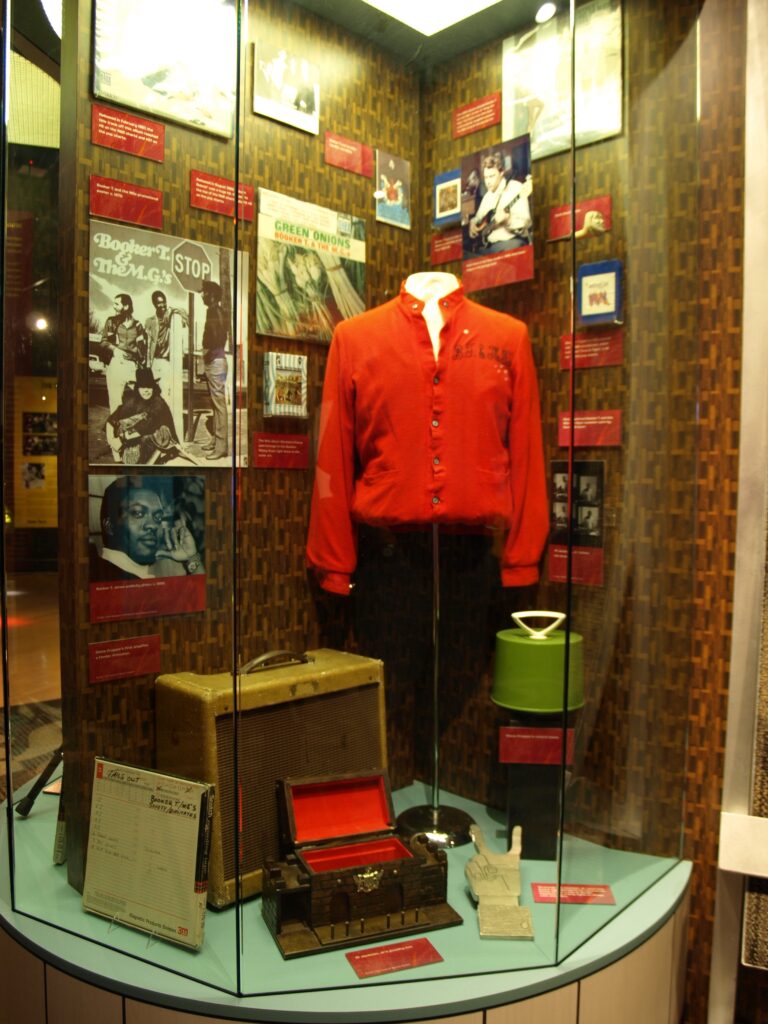 The Otis Redding Foundation and Mini Museum (Macon, GA) includes memorabilia and newspaper clippings of the “King of Soul.” The museum site is also the front end for an educational foundation that is lovingly managed by his family.

The Augusta Museum of History (Augusta, GA) holds an impressive exhibit on soul singer Mr. James Brown. There are videos of his performances and ground-breaking dance moves, his colourful costumes, and an audio tour of memories about the man known as “The Godfather of Soul.” 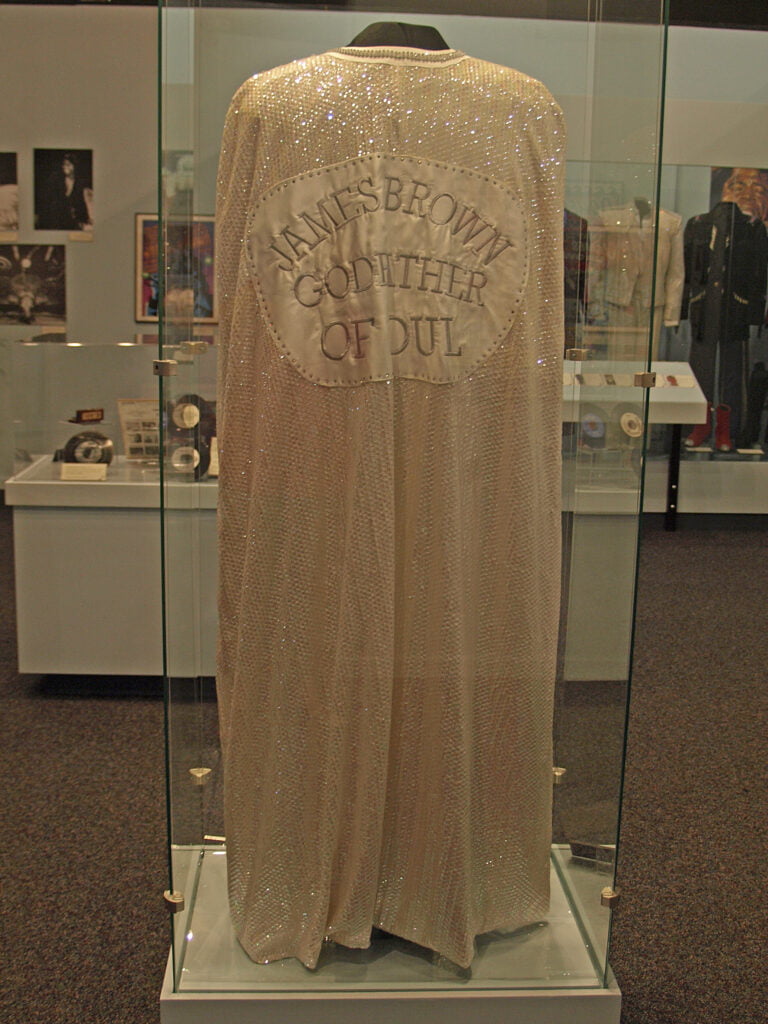 The Stompin’ Tom Centre Homestead & Schoolhouse (Skinners Pond, PEI) is modest but loving testament to the late singer, songwriter, and iconic Canadian storyteller. There’s a soundproof karaoke booth loaded with tunes like Bud the Spud and The Hockey Song, displays of his awards, and the restored one-room schoolhouse where the musician attended as a pre-teen. 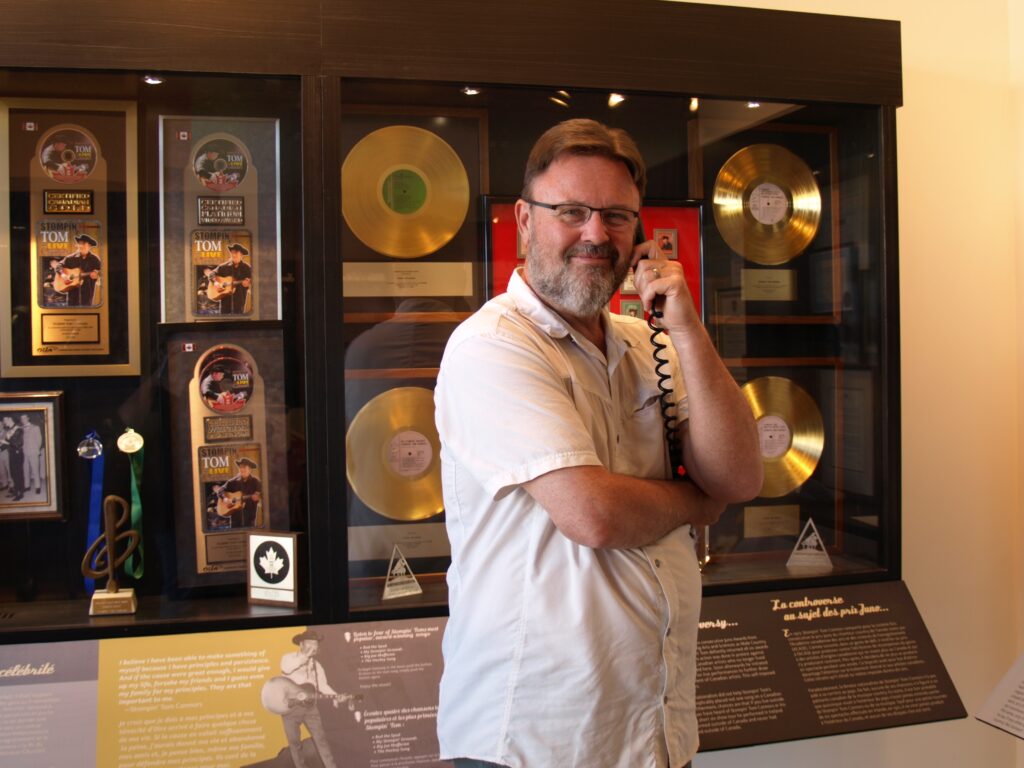 Spending some time in the listening booth at the Stompin’ Tom Centre Homestead and Schoolhouse. Photo Credit: Josephine Matyas

Birthplace of Country Music Museum (Bristol, VA) is a Smithsonian-affiliate museum celebrating the recordings of the 1927 Bristol Sessions that brought country music into the living rooms of the nation. The Sessions were the first recordings of mountain music, creating an archive of Americana nicknamed the “Big Bang of Country Music”: the moment when technology, talent, luck, and circumstance captured what would become the American blend of gospel, folk, and country music. The immersive displays include video, touchscreen, and audio clips mixing state-of-the-art displays with a down home feel. 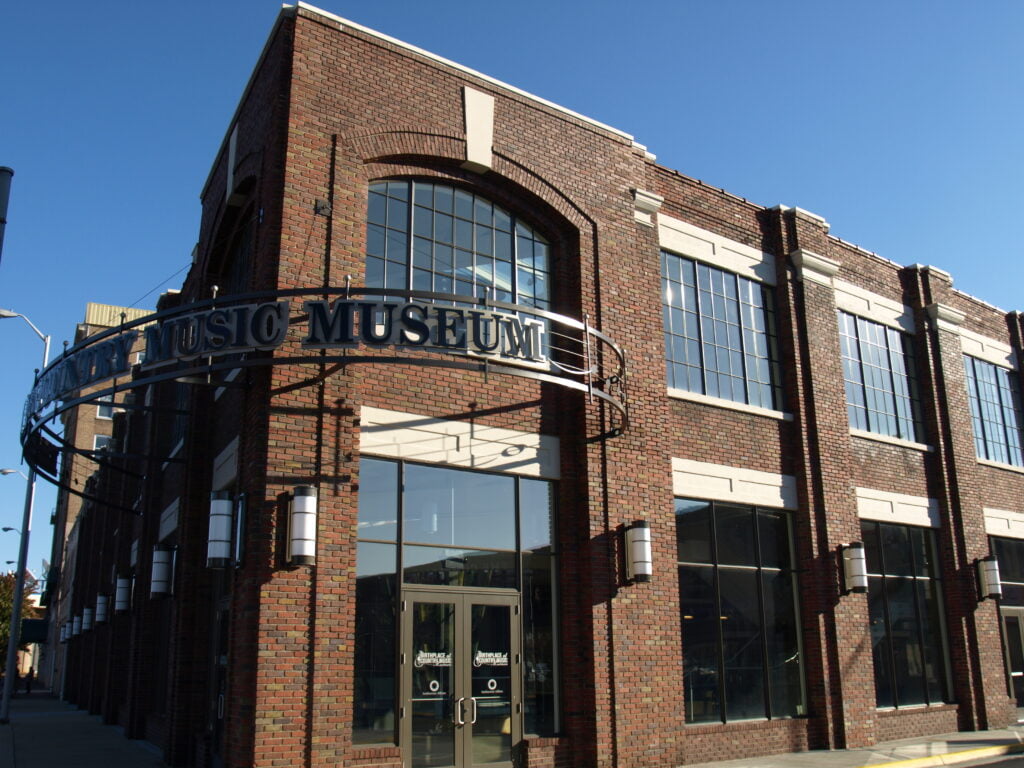 The Carter Family Fold (Hiltons, VA) is the spiritual and physical home of the influential Carter Family – the “First Family of Country Music” – and the location of A.P. Carter’s dry goods store that has been transformed into a small museum of family musical history. Returning in spring 2022, there will be weekly performances of old-time country and folk music in the dance hall/theatre. 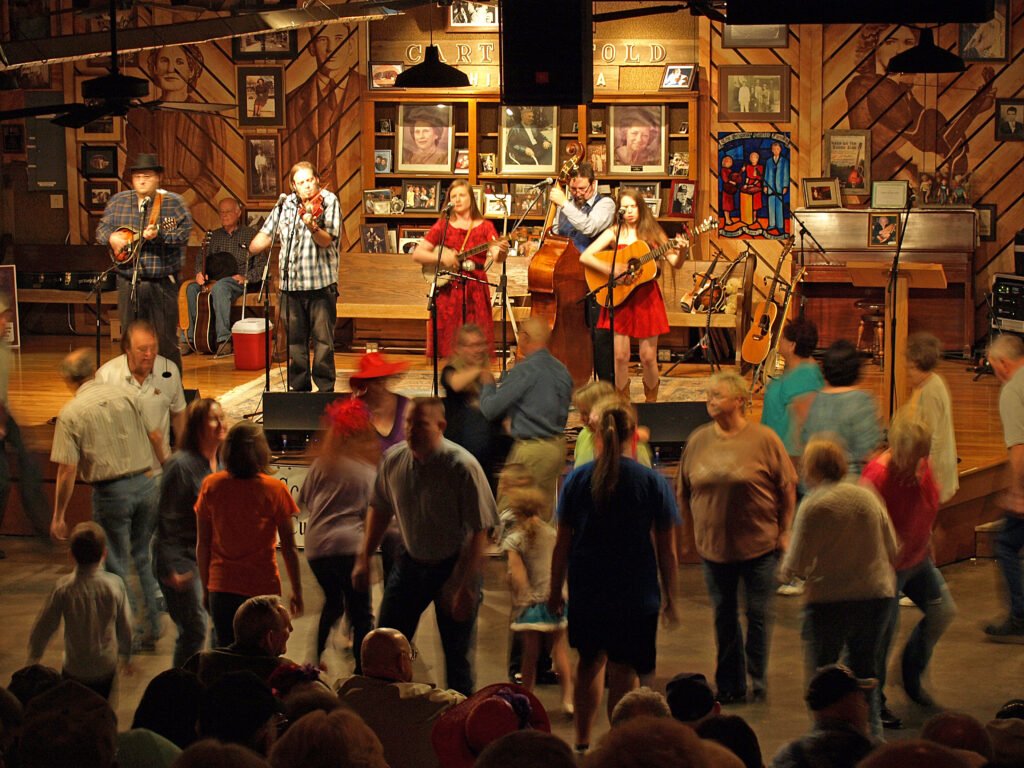 The Country Music Hall of Fame and Museum (Nashville, TN) covers the very earliest days of country music (The Carter Family, Jimmie Rodgers, and Hank Williams) to the current-day stars dominating the radio waves and concert stages. Galleries and displays take visitors through the evolution of country music from folk art to big business. There’s an impressive collection of exhibits tracing musical history, stage costumes, gold records, and an expansive Hall of Fame.

The Grand Ole Opry (Nashville, TN) has been hosting the biggest names in country music for 95 years. While not a traditional museum it is a place with deep historical roots. The guided backstage tour shows the glamour behind the curtain; the stories of country music, the musicians, and the stage that’s home to the famous unbroken Circle. 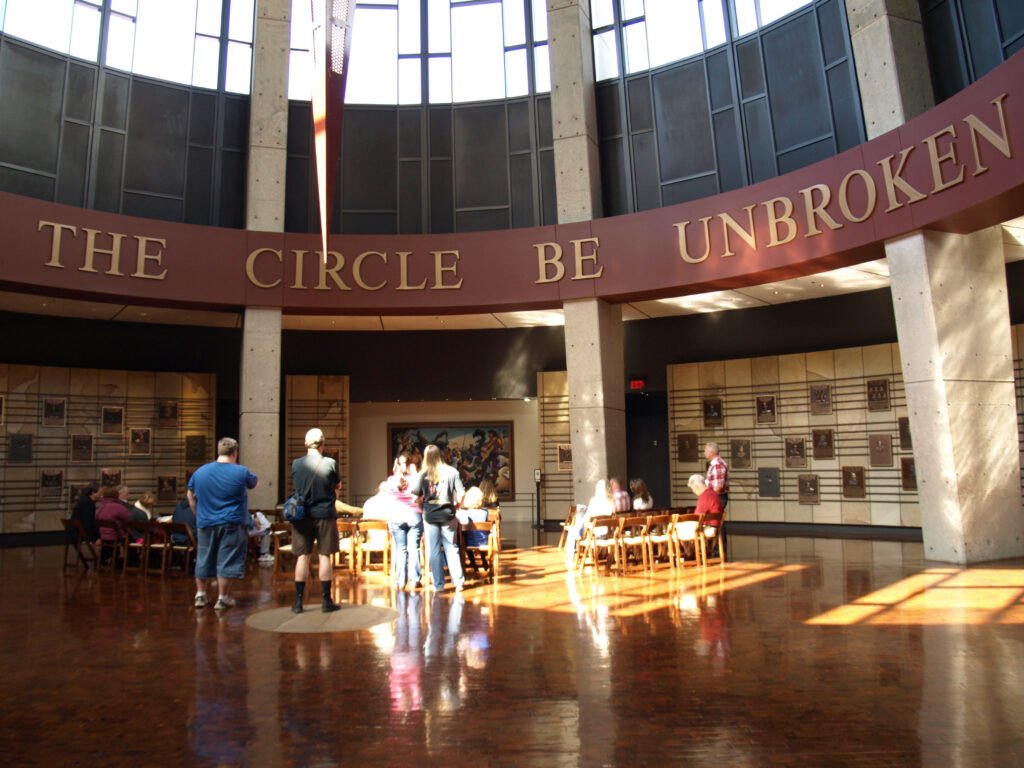 North Carolina’s Appalachian foothills were home to Earl Scruggs, the son of a hardscrabble sharecropper who developed a frenetic style of banjo picking (“10 notes a second”) helping to define a new music genre. Scruggs did for the banjo what Jimi Hendrix did for the electric guitar: he showed what was possible. The Earl Scruggs Center (Shelby, NC)– a stop on the Blue Ridge Music Trail – is a cutting-edge tribute to the man and his music. Displays include original instruments, video clips, interviews, and interactive displays where you learn to play the banjo through a touchscreen or call up photographs of musicians from the times. 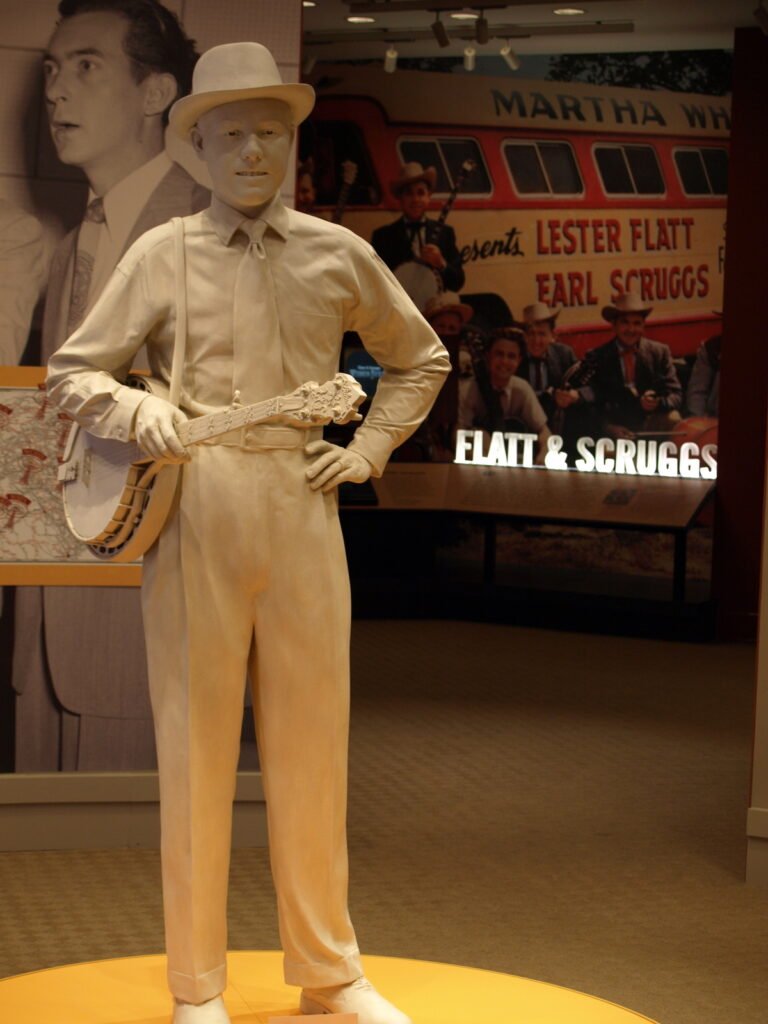 The International Bluegrass Music Museum (Owensboro, KY) collection includes much on Bill Monroe (the “Father of Bluegrass”), concert posters, sheet music, and carefully preserved musical instruments. A self-guided tour through the “River of Sound” looks at the creative sources that shaped bluegrass, and the early years through the modern day of the genre. 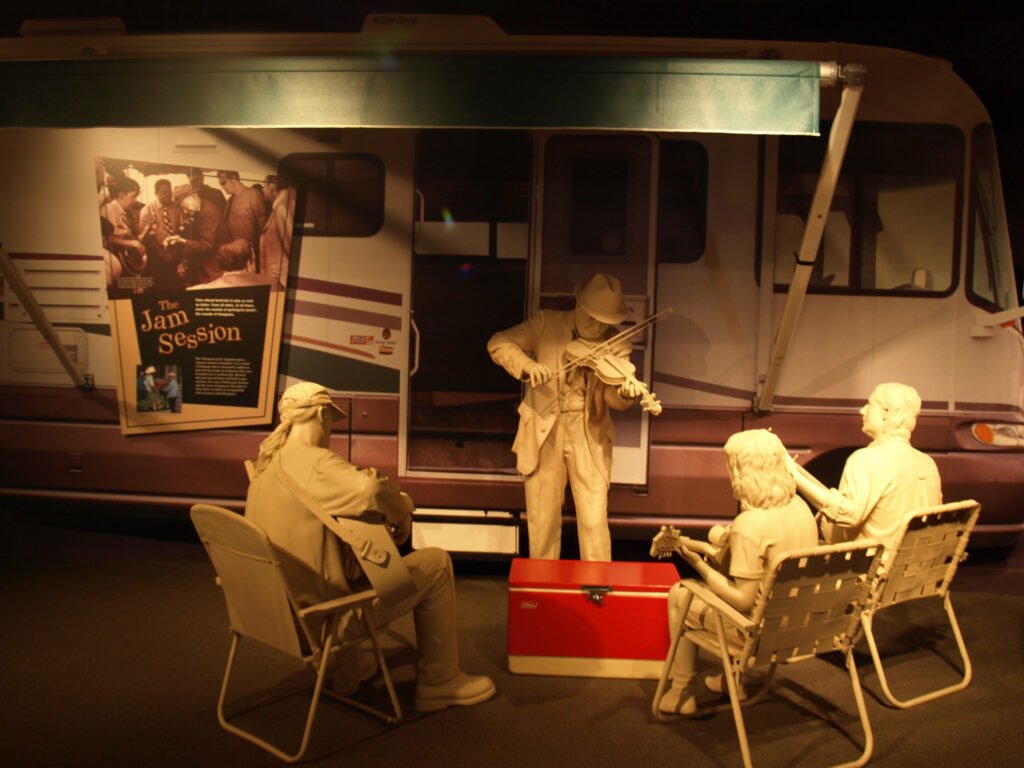 Anne Murray Centre (Springhill, NS) pays tribute to the life and accomplishments of one of Canada’s best-known singers. The displays trace her early years in country music and her movement into the world of pop music. The Centre is the longest operating museum dedicated to a Canadian music artist. There’s an interactive mini recording studio, walls of awards, video theatre, artifacts, and memorabilia.

As part of your trip planning, check online for current COVID-19 protocols and restrictions. A few museums are closed until early 2022, and some others are operating with reduced hours.

Some of our favourite RV camping stops along the way: 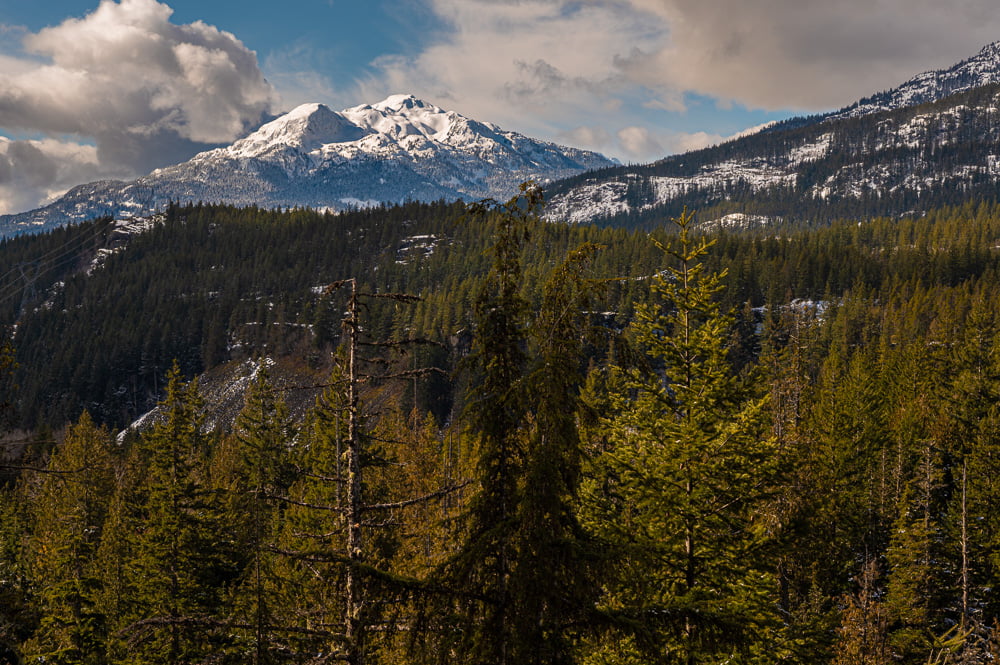 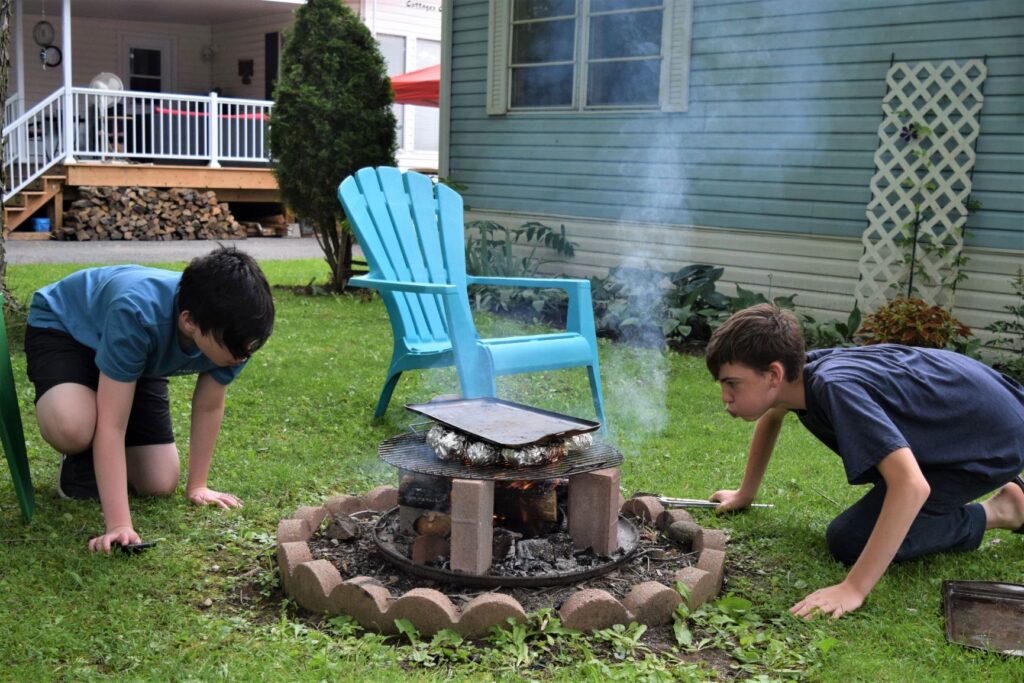 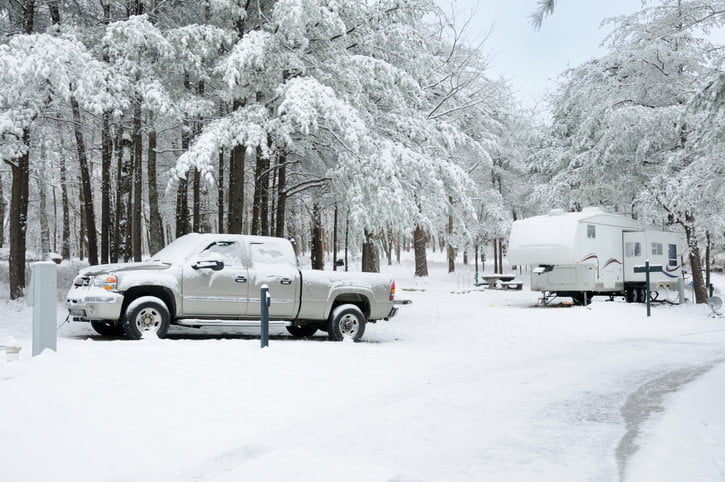